It seems like 2021 is a great year to get Lynn Valley blooming again! With gardening booming we want you to save a little bit of space for Project Sunflower. We want to see the gardens, balconies, and patios bursting with sunflowers this fall! 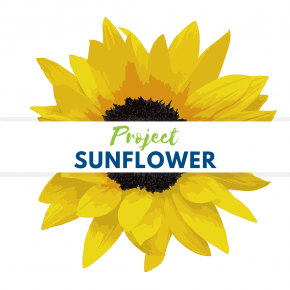 We have got seeds and we want to share them with the gardens and pots throughout Lynn Valley. Do you remember a few years ago – eight years ago? LynnValleyLife.com helped families sow some smiles. Looking back this is one of our favourite community projects. It was such a joy to see the neighbours united in a bit of friendly garden competition and mutual appreciation.

As we plan for another summer spent close to home we will be launching Project Sunflower again!

We feel this project is perfect for sharing. We hope you will consider starting some seeds and delivering them to neighbours and friends. The goal to have as many patches of sunflowers blooming throughout Lynn Valley.

Want this to be an opportunity to connect. Follow us throughout the summer on Instagram or Facebook to participate in our Virtual Fall Fair contests where we will have some prizes for Project Sunflower participants.

How to get involved

Quite simply, fill out the form below and we will get you some seeds. Share if you’d like and make Lynn Valley Bloom.

Sunflowers should be direct-seeded in the garden from mid-April to mid-May, after all risk of frost has passed. They aren’t too fussy about the soil (though it shouldn’t get water-logged), and they love to be in as much sunlight as you can offer them. For some good sowing and growing tips, check out the West Coast Seeds advice here.

This form can be finicky when viewed on some mobile devices.

Miss Mollie Nye herself couldn’t have asked for a more pleasant celebration of the 100th birthday of the house her family built on Lynn Valley Road in 1913.

House staff and volunteers from the Lynn Valley Services Society, which operates the house on behalf of the community, brought together model train engineers, bakers, crafters, musicians and local organizations and businesses to put on a party on Saturday, Sept. 21 that featured a tea, traditional fall fair, community booths and a model train display.

END_OF_DOCUMENT_TOKEN_TO_BE_REPLACED

It’s been fantastic travelling around Lynn Valley and seeing more and more sunflower patches out in full bloom. Perhaps they are showing up more now, thanks to the backdrop of our recent grey weather!

Some of our own flowers are still to emerge, and others are drooping. But just because their petals may no longer be perky, don’t forget that your sunflowers are far from finished. For many creatures, the best is yet to come!

END_OF_DOCUMENT_TOKEN_TO_BE_REPLACED

The stems are staggering, the leaves are lion-sized, and the blooms are bursting open. Congratulations to all you Project Sunflower growers who managed to nurse your seedlings through to flowering! 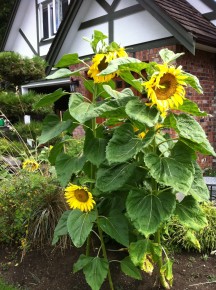 We’ve seen the results as we’ve been cruising the neighbourhood streets, and some of the sunflower patches are a sight to be seen. Unfortunately, a fair number of people (and we thank them for their efforts!) planted seeds that rotted in this spring’s ongoing rainy weather. Alternately, some of the seedlings that did manage to poke their heads up were promptly decapitated by irksome slugs. But we figure that’s all the more reason to celebrate the ones that survived!

END_OF_DOCUMENT_TOKEN_TO_BE_REPLACED 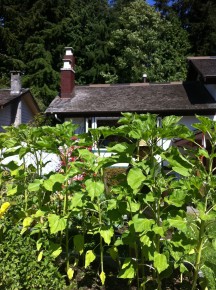 Can you spot the editor? Thanks to a wall of sunflowers (and her sunhat!), probably not – but she’s there!

It’s official, my sunflowers are now taller than I am (which, I have to admit, isn’t saying much). Still, I’m very proud of them, especially since much of the rest of my garden is suffering.

My Shasta daisies are once again this year covered with aphids, despite ladybugs, blasts from the hose, and insecticidal soap. The blooms are starting to brown and wither; whether it’s from the aphids, the ants that follow them faithfully, or the all-out attempts at cure I do not know. My neighbours enjoy cheerful, unblemished daisies with nary a bug; mine look like refugees from a biblical plague of locusts.

My clematises (clamati?) are, save one, stubbornly refusing to flower. One is brown with a few straggly green leaves; no, it’s roots are NOT in the shade as prescribed by garden books everywhere, but even when its roots WERE carefully put in the shadows last year it didn’t behave any better, so to heck with it. Another is a standard jackmanii, but ever since I bought it it has refused to bloom, and though it looks healthy enough it only grows teeny-tiny leaves, as if it drank something from Alice in Wonderland (or was it eating something that made her shrink?)

END_OF_DOCUMENT_TOKEN_TO_BE_REPLACED

From the garden of Lynn O’Malley:

Well, I’m very glad I planted my Project Sunflower seeds out in mid-May, because ever since then – between Lynn Valley Days and end-of-term festivities and grad and visitors – there has certainly been no chance for much meaningful gardening.

Fortunately, Mother Nature has been doing all the work, and most of my seeds have turned into fine young plants, many of them now over a foot tall. I need to thin out the ones in the garden bed; although sunflowers don’t prefer to be moved, I am hoping some will transplant into neighbours’ gardens.

END_OF_DOCUMENT_TOKEN_TO_BE_REPLACED

From the garden of Lynn O’Malley…

This was going to be a celebratory post about the fact that my sunflower seeds poked their heads above the soil last Saturday, a scant week after I detailed their planting in this post.

END_OF_DOCUMENT_TOKEN_TO_BE_REPLACED

From the garden of Lynn O’Malley, voice of the valley:

For the past two months, the LynnValleyLife team has been planning and promoting its scheme to blanket Lynn Valley in summertime sunflowers. We’ve talked sunflowers, mailed sunflowers, photo’d sunflowers and dreamt sunflowers. It occurred to me that amidst all the fuss, I might forget to actually plant the darn things!

END_OF_DOCUMENT_TOKEN_TO_BE_REPLACED

This is the week that many of our LynnValleyLife Network members are receiving their Project Sunflower seed packets in the mail or on their doorstep (let’s hope those late-season snow flurries won’t be visiting the Upper Lynn area any more!)

END_OF_DOCUMENT_TOKEN_TO_BE_REPLACED

Leave space in the garden for Project Sunflower

Last fall, those of us at LynnValleyLife HQ had a great time reading the nominations for our first-annual Good Neighbour Award, which wrapped up at the end of December. In fact, we had such a good time, we realized we’d need another fun community initiative to keep us busy until the contest kicks off again in November!

So we put our heads together to plan a new neighbourhood undertaking – and we’re calling it Project Sunflower! We’re asking people to jump on board and plant one, two or a whole patch of sunflowers in their front gardens this spring. Wouldn’t it be great to drive (or walk, or bike) through the neighbourhood, and see hundreds of sunflowers brightening our yards and streets as summer progresses?