BY DENISE NEWALL, STUDENT REPORTER: Argyle Secondary is constantly striving to make the school a safer and more welcoming environment for the entire student body. But now an Argyle club has taken that philosophy and created a campaign and Youtube video it hopes will benefit not just local students, but people in the much-wider world.

Over the years, many clubs and organizations have been established at the school to focus on the improvement of different areas within the Argyle community. Recently, the attention has been directed to Best Buddies, an organization dedicated to enhancing the community through one-to-one friendships between individuals with intellectual disabilities and other students. Simple acts like eating lunch or playing games together have the ability to change the high school experience for all students involved.

Best Buddies’ most recent campaign was the “Spread the Word to End the Word” campaign, a week-long effort to end the use of derogatory words “retard” and “retarded.” Argyle Best Buddies chapter leader Cara McGuire, along with other members, made presentations, encouraged students to pledge, created an awareness video, and more.

By the end of the week, 943 students at Argyle had pledged to Spread the Word to End the Word, and the Youtube video was viewed 2,154 times. With statistics like that, it is safe to say that the campaign was a definitive success. 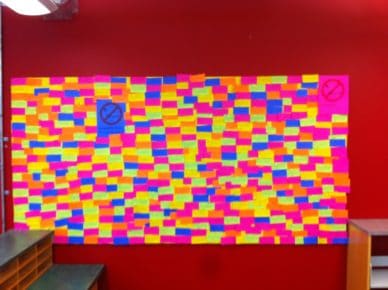 A wall at Argyle displays pledges from students who say they won't use the word 'retard' in a derogatory fashion.