Bob McCormack spends his life making shade for others

FROM THE EDITOR: The Greeks said it best: “A society grows great when old men plant trees whose shade they know they shall never sit in.”

They must have been thinking ahead to people like Bob McCormack, who – now 70 years old – has spent most of his life ‘planting trees’ of one kind or another for his native Lynn Valley community.

“I won’t see the fruits of most of these [long-term] projects,” Bob acknowledged recently over coffee at Delany’s, one of his favourite places to meet with fellow citizens working on issues around the town-centre development and future transportation systems. But he doesn’t show any signs of slowing his pace.

“There’s something inside me that always makes we want to say ‘yes’,” he chuckles, as he recounts just some of the roles he’s played over the past few decades. They include everything from coaching football to sitting on the rec commission to years spent serving on the boards (often as chair or vice-chair) of groups such as the Lynn Valley Community Association, the North Shore Disability Resource Centre, Greater Vancouver Neighbourhood Houses, Silver Harbour Centre, the arts council, and the Mollie Nye House standing committee.

In fact, most people are so familiar with Bob’s many volunteering hats, they may well have forgotten that he had a long professional life as well, starting in the White Spot commissary – he knew “Uncle Nat” Bailey well – and ending with his retirement in 2003, from a position as purchaser for the Vancouver Coastal Health District, responsible for food services and capital buying.

Given all the achievements Bob has played a role in over the years, I was curious to know what he’s most proud of.

“I was really happy when the district started listening to the needs of physically challenged people,” he said, pointing to improvements in sidewalks and street corner buttons that have helped a much wider range of people be independently mobile. And he’s proud to say that the recreation commission, too, has greatly expanded its offerings to encompass people of all abilities.

Personally, though, one of his definite highlights was getting a last-minute call to step in and be a torchbearer when the Olympic flame was run through Lynn Valley on Feb. 10, 2010. 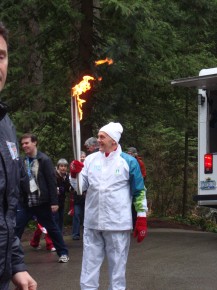 From having his photo taken with the torch on the suspension bridge – an image that appeared worldwide via Reuters – to having his picture taken with hundreds of local revellers at the Valleyfest celebrations in Lynn Valley Village (which, of course, he’d spent hundreds of hours helping to plan), Bob says “it was amazing and I loved it all.”

One of the things he remembers well is the Quebecois ‘handlers’ who were travelling with the torch telling the driver of the pace vehicle in Lynn Canyon Park to “go slow – this is the most beautiful place we’ve seen on the route so far.”

Bob’s community pride is evident in most of his comments, and he talks about all the wonderful people he’s crossed paths with over the years.

Bob’s roots grow deeply in this neighbourhood, starting with grandparents who were involved with the Lynn Canyon concession stand in the 1940s and a dad who was a local firefighter.

Many of his growing-up years were spent living at 555 Fromme Rd. He could look across the gravel road to the site of what is now Argyle school, but was then a large acreage with only one house situated near the current James Buchanan Theatre. During the summer, 15 to 20 horses grazed the property, which stretched almost all the way down to Mountain Highway.

He’s a living repository of all sorts of other memories, too; he recalls the grocery store that used to be in the Waves coffee shop locale, and the Brier Block that was situated where the Petro-Can now stands, kitty-corner to the still-existing Fromme Block. He even remembers his grandfather telling him about a proposal that was being touted in the mid-20th century for a floating dance hall in Lynn Canyon. The idea was shot down; at that time, the various churches held sway in the valley and there was nary a drink to be had anywhere.

Fortunately, Bob and his wife Judy have 21 nieces and nephews, and 27 great-nieces and –nephews, who will take at least some of his memories of times past with them into the future.

Looking back now, Bob credits his volunteering spirit in large part to an accident – one that happened when he was 17 years old. He was a passenger in a car exiting out of a laneway near the site of the Black Bear Pub and driving onto Lynn Valley Road. The next thing Bob knew, he was waking up in a ditch – having been smashed by an oncoming vehicle – and was whisked to hospital, where he had to deal with the amputation of his leg.

He says that his immediate response – uncharacteristic, he says, for the free-spirited youth he’d been up until the accident – was to say, “Well, there’s no use in crying over spilt milk.”

He says the community was wonderful in the way it stepped up to support him and his family at that time, and he’s been joyfully paying back ever since.

“If I hadn’t lost my leg, I wouldn’t be sitting here now,” he says emphatically. “It changed my life. You just don’t know yourself until something happens.”

Well, Bob knows himself now, and so do hundreds of other Lynn Valley residents whose community has been enriched by his ongoing efforts. Thanks from all of us, Bob, for planting those many trees.