This “lost-in-the-woods” story has become my mother’s favourite, and she pushes me to tell it to people at parties ALL THE TIME. If I demur (having told it a zillion times already), she just launches in and tells it herself. But she gets all the details wrong, which bugs me, so of course I end up telling it all over again. So, in honour of my mother, Chris, (who is glad I made it home), and as a cautionary tale to others who might be going for  a wander, here is my story… 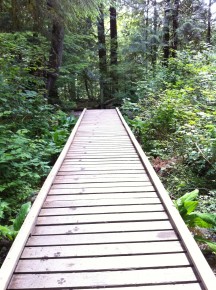 It was high summer (not autumn, Mom), and my neighbour’s brother, David, had just knocked on the door to return a borrowed cooking pot. He was just on his way up the street to take a walk in the woods off the top of Hoskins, as he wanted to see if he could locate an unauthorized biking trail he’d heard about (this being a number of years ago, when mountain biking was at the ‘wild west’ stage in its development).

Suddenly joining him seemed like a brilliant idea. Not because I was interested in illicit trails, but because my dogs were long, LONG overdue for an outing and the thought of company made putting down my book a bit more palatable (Please note that I am not famously athletic in my leanings.) 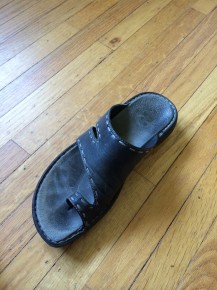 Not wanting to keep David waiting, I quickly leashed the dogs, shouted up to my boys that I was heading into to the woods with David, and was out the door in 15 seconds. Of course I didn’t change my footwear, because my comfortable slip-ons were perfectly fine for the half-hour walk I envisioned ahead of us.

We accessed the Baden Powell trail from the the top of Hoskins Road, David, the dogs and I chugging steadily up through the familiar woods. Shortly before reaching the old Mountain Highway, though, David plunged off the well-worn track and headed north in search of the reported biking trail. (Please note that throughout this tale I use “north” to mean “up” the mountain,  which does not necessarily mean I am actually travelling north. Or it might; I wouldn’t know. “South” means “down.” My admittedly underdeveloped sense of geographic awareness may explain some of what follows.)

I followed David 40 or 50 feet into the woods, where he was examining a trail that snaked up further “north.” Excellent, I thought. We found it. Time to go home.

David, however, was determined to trace its upward path, and investigate what planks, jumps or teeter totters might have been erected along the way to tempt bikers into risking their necks. I was not at all enthusiastic (see previous note regarding lack of athletic leanings), but thought that as I had invited myself along on HIS adventure, it was only fair that I play along.

This selfless philosophy did not last long. After only a few minutes of hauling myself over logs, untangling leashes from branches, and retrieving my slip-OFF shoes from under ferns, I was beyond noble sentiment. Some whining about going home may have taken place (my memory is not clear on this point). David’s enthusiasm, however, remained undimmed.

I could have turned back. I could have been sensible; remembered my footwear, my domestic responsibilities, and the fact that I had little patience for these kind of tramps through the forest. But the meek little acquiescent part of me that “goes along” so as not to be a nuisance held sway. (Note to my husband, should he be reading this: Yes, I DO have a part like that, it is often just deeply hidden.) 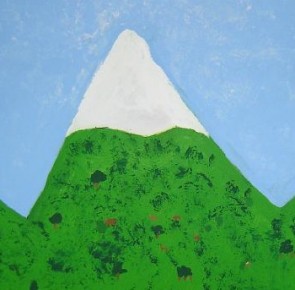 Caution: Actual mountain not as it appears in diagram

I grumbled a little, but carried on, travelling “north.” When I turned around again a few minutes later, all familiar landmarks had long disappeared.  Mountains, which in my head are all structured like a child’s line drawing with two straight, 45-degree angles meeting at a right-angled summit, are not nearly that simple when you’re standing on the side of them as opposed to looking at them in the distance from your living room window.

That hillside that looks smooth from afar contains trenches, knolls, and other unexpected landforms that make “north” and “south” far less obvious than one would imagine. At least that was the case on this particular hillside, and I was soon not sure that I could have found my way back to the trail even had I decided to rebel against my companion (or I realized later, if he had turned an ankle and I needed to fetch help).

We carried on – him curious, me cranky – until I finally did get more assertive in my complaining. Constantly struggling over logs and dogs had not made me a sanguine traveller, and whatever amazing/alarming mountain bike constructions he had hoped to find were long passed. To his credit, longtime pal David recognized that She Who Must Be Obeyed was making an appearance – but, he assured me, it would likely be faster and easier to get back to the proper trail by continuing our climb rather than by retracing our steps. So we carried on, struggling through undergrowth and downed branches. 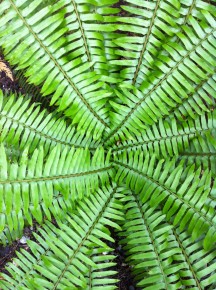 Natural features can all look mesmerizingly alike when you’re lost.

I’m not sure what adjectives I would employ to describe the next FOUR HOURS in the forest, but “faster” and “easier” are certainly not among them. “Exhausting,” “anxious,” and “panicky” do pop to mind fairly readily, however. I was worried about the boys left at home on their own, wondering where the heck I was, but with all the aforementioned furrows and gullies on the mountain, it was difficult to find a cell signal. A single signal-strength bar finally materialized on my phone screen, and I was finally able to let them know that I was OK and with David – but that was about all I could tell them. David later got a call out to his brother-in-law who knows the woods reasonably well, and who (if I recall) kept encouraging the go “north” approach. (Not particularly welcome advice, when every muscle in your body is screaming “turn south!”) 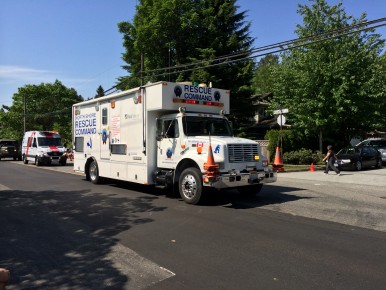 North Shore Rescue: I prefer my close-ups in parades…

I had visions of North Shore Rescue being dispatched to find us, and knew that my acquaintance on the team would never, ever let me live it down if he found me deep in the woods so spectacularly ill-shod and ill-prepared. I further imagined having to curl up with the dogs for warmth if we were lost overnight, and wondered who would get to sleep with Genny, the massively furred Bernese mountain dog, and who would be stuck with Toby, the eight-pound shih tzu.

I scrambled along as best I could, nearly weeping with vexation when a clearing we had thought from a distance was Mountain Highway turned out to be a dry creekbed. Total gloom soon turned to exhilaration, however, when the gravel road did blessedly appear not long afterward. We staggered out of the forest (I may have kissed the roadbed, I’m not sure) and discovered that we were up above the seventh switchback, several kilometres above the paved end of Mountain Highway. We had left home shortly after noon; it was now about 5:30.

We telephoned our loved ones and told them to stop selling our stuff as we were coming home after all. Tired but buoyed by survivors’ giddiness, we set off down (down – what a wonderful word!) the crooked gravel road towards home.

The self-congratulations and shoulder punches only lasted a few more minutes, though, before one of us looked around and asked “Where’s Toby?” Where, indeed. After sticking with us through thick and thin, his poor four-inch legs struggling over one obstacle after another, Toby had emerged onto the road and then seemingly vanished when our back was turned. We retraced steps, calling, but to no avail. Genny the Bernese, who had always been a tad jealous of Toby the Younger Interloper, may have known something, but she wasn’t letting on.

Whatever else I remember about David from that day, what I remember best is this: that, ever the gentleman, he insisted I go home, while he stayed on the mountain and looked for the dog. Too tired to argue, and thinking about my waiting children, I gratefully agreed, and made my way down Mountain Highway, arriving home in another 45 minutes or so.

Happiness at the homecoming was, of course, tempered by worry about Toby, who didn’t return with David, either. His plucky little coyote-snack-sized self was out there navigating uncharted territories. We quickly put up posters at trailheads, and my sister and others headed out for a look. Later that evening, she learned he’d been spotted on one of the trails, but hadn’t allowed anyone to approach. We went to bed, sadly aware of him alone out in the dark beyond our windows. 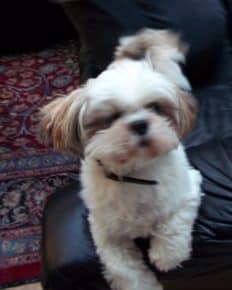 It was midnight when a daughter of the house arrived home, and she popped her head into our bedroom. “Why’s Toby sitting on the front lawn?” she asked us, unaware of all the earlier drama. Toby – what a champ! He had indeed found his way home, despite having been kilometres out of his usual territory. After drinking about half a litre of water and accepting our fond congratulations, he settled into his usual spot in preparation for a good night’s sleep.

We followed his example. I awoke the next morning with aching legs, a newfound resolve NOT to do things just because your friends are doing them, and plenty of gratitude that events turned out as well as they did.

As we all know, stories in these woods don’t always have happy endings. So, take it from me – you really can get lost after just a few minutes of off-trail bush-whacking, even in an otherwise familiar environment.* All that safety stuff that North Shore Rescue talks about? It isn’t just for extreme hikers or “other folks.” It’s for everyone who wants to get home in one piece.

* P.S. If you run into David, and he says “Oh, we weren’t REALLY lost – I was pretty sure I knew where we were going,” DO NOT BELIEVE HIM. 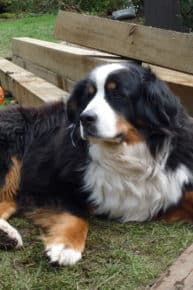 Genny, who survived this walk and many more besides. RIP, GennyDog..