If you’ve come here looking for excellent photos of the Canada Day Parade, you’ve come to the wrong spot.

If that’s what you’re after, you’re advised to keep an eye out for the fine work of my former colleagues at the North Shore News. I, on the other hand, love parades but spend too much time misty-eyed and waving flags to be able to produce much in the way of a visual record.

Between the stirring salutes exchanged between the marching legionnaires and the uniformed members of the reviewing stand, the skirl of the pipes, the dashing Mounties in red serge, the old folks in their red-and-white bedecked electric scooters and the young ‘uns standing tall to sing O Canada, there is much to touch the sentimental heart. A parade celebrates all that is good in a community: the volunteers and creative souls; the rescue heroes and the service men and women; the non-profit organizations that help people around the block and around the world.

So I had much to occupy my hands this morning, given the need to alternate eye-dabbing with candy-catching, and frankly you are darned lucky to get any photos at all out of me.

But I did realize it was my duty to pull myself together long enough to snap a few shots of some of our neighbourhood entries, so here they are, along with my very best LynnValleyLife wishes for a happy Canada Day. 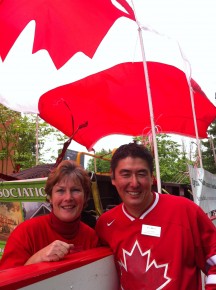 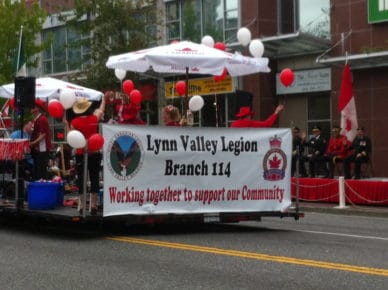 LV Legion was on hand with their band 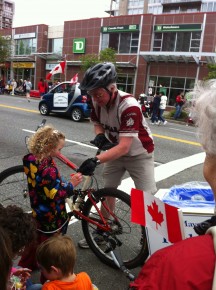 NVD Mayor Richard Walton was handing out candy when he wasn't pedalling his bike and trailer along the parade route.