Have you been wondering about the face behind the North Vancouver RCMP’s Facebook page? We have! The force’s Facebook and Twitter posts have become ever more winsome and chuckle-worthy over the past months, and we finally decided we had to meet the clever keyboard copper behind them.

Well-respected former media relations officer Richard De Jong saddled up and left town to enjoy a well-earned retirement a year ago, and we had yet to sit down for a chinwag with his replacement. But the force’s Facebook and Twitter posts have become ever more winsome and chuckle-worthy over the past months, and we finally decided we had to meet the clever keyboard copper behind them.

LynnValleyLife was founded on a philosophy of using its communication platform to help strengthen the already-great community we live in. We were therefore delighted to meet up this week with Sgt. Peter DeVries, who similarly believes in using storytelling, humour, and well-chosen images to engage people and build relationships.

That means posting photos of Pilot and Mabel (his dog and cat respectively), before-and-after shots of his efforts dying a uniform shirt to wear on the recent annual Pink Shirt Day, and contests such as one asking people to name the two-dimensional lifelike police officer who stands at various locations curbside, posed with radar gun extended (the winning name chosen was “Radar O’Reilly.”) DeVries charmingly ensures lucky contest winners get their day in the sun by awarding them an “RSE”—a “randomly selected emoticon.”

Meeting up at a coffee shop near the detachment, Sgt. DeVries acknowledges that some of his fellow officers were a little dubious about the incorporation of “fluff” into their public image. But they are being won over as they see the resulting conversations and engagement that simply wouldn’t have happened had the force stuck with using social media only to issue copies of staid press releases. And they can’t help but appreciate the public’s frequent online comments expressing gratitude for the officers’ ongoing efforts to keep the community safe. After all, who doesn’t like getting a pat on the back every so often? 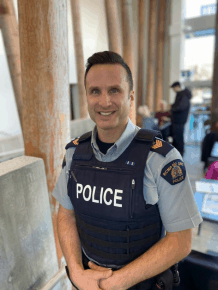 An English literature and philosophy graduate, Sgt. DeVries enjoys bringing both a creative and analytical mind to his role. Twenty-two years ago, when DeVries was a new officer, he says all media requests would have been sent straight to a watch commander, who more times than not would respond with a terse “no comment.” But times have changed, with the media liaison role gradually being developed and the force – like many institutions – becoming more transparent in its day-to-day workings.

Sgt. DeVries credits new North Vancouver Officer in Charge, Superintendent Ghalib Bhayani, with giving the media office even greater license, telling him that “[DeVries’] creativity is the limit.” DeVries and newly hired media office colleague Alexandra Yallouz are rising to the challenge, determined that citizens get a glimpse into some of the untold and unknown workings of the force that even DeVries hasn’t been aware of to date.

DeVries clearly has a great deal of respect for the fine work of his fellow officers. At the same time, he is determined that everyone on the force should see their role as one that is not just about law enforcement, but about healing the community. “We have a huge opportunity to show compassion every day,” he says, pointing out that even small gestures can be hugely impactful when someone is vulnerable or experiencing a difficult circumstance.  It might just be a sandwich offered by a beat cop, or it might be the moving thoughts offered online to North Vancouver’s Iranian community following the devastating airplane crash in January. Building and maintaining trust – steadily, through means as humble as awarding someone a “randomly selected emoticon”– encourages people turn to police officers for help when they need it.

What can LynnValleyLife readers and local citizens do to help the RCMP?

When asked, DeVries thought for a long moment. It would be easy to ask people to “like and follow” their Facebook page, he said, but that could end up being a one-sided conversation.  “Get to know us,” he said instead. “Tell us what you need.”

Talk to officers in the street, attend the occasional Coffee with a Cop events, and share your story. DeVries thinks everyone – organizations and individuals alike – can find a way to help those around him. He is clearly eager to play a role in making that happen, and is happy to respond to emails sent to [email protected].

Just before we close, Sgt. DeVries invites citizens to keep an eye out in the months to come—he is “very excited” by some of the innovative initiatives he and his new media office colleague will be launching. Thanks for the heads up, Peter…we’ll be watching!

To follow the comings and goings of the North Van RCMP yourself, you can search them out on the following platforms: