After a tough couple of years the Lynn Valley Legion is returning to its roots and focusing on remembering Canada’s veterans this Nov. 11 with poppy tagging and a ceremony at Lynn Valley’s Veterans’ Plaza followed by a community open house. 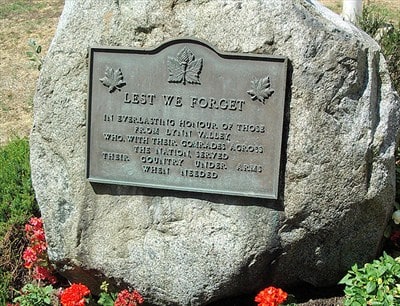 “We are a service organization,” says Royal Canadian Legion Branch 114 President Diana Saboe. “Each year we give $100,000 back to the community. We are the Guardians of Remembrance. Even when the bar was closed we were open as a service organization. We still did our poppy tagging and raised about $60,000.”

Saboe is referring to the past 18 months or so that saw the Legion closed by its provincial oversight, a legal challenge, and the dismissal of many members. It reopened in April with a board appointed by the BC-Yukon Command and has been working towards this November 11th ever since.

“We need the legion because we remember,” says Saboe. “We are the only organization that holds and organizes Remembrance Day ceremonies. Having a legion in each community – Lynn Valley, Lonsdale, West Van – is important because there are veterans in each community and they have different needs.”

This busy time is energizing the legion membership, whose core volunteers are diligently donating hours upon hours.

“Lest we forget – We remember them – our two slogans are important to teach to our youth and those younger because of the the sacrifices that were made allow them to have the freedoms we have today,” says Saboe.

Passing this on has become more challenging as the schools and teachers have increasing pressure from more places placed upon them, says Saboe. They legions organizes poppies for North Vancouver public and private schools.

“Most the highs schools ask if there is a veteran who can speak or attend their service,” says Saboe. “It is a matter of getting people to drive the veterans.

“There are a handful of us running Remembrance Day for the last couple of years – it feels like we are doing the work of 10 to 12 people each,” says Saboe. “It can get a bit daunting but we are dedicated to this.” 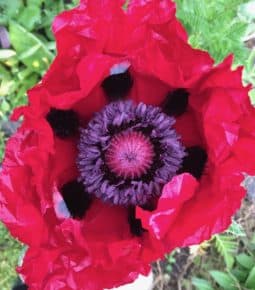 The Lynn Valley community can help at the legion in many ways this time of year. There are organizational details to look after for the November 11 ceremony, potluck food can be donated for the post-ceremony open house at the legion and, of course, there is the poppy campaign – or Poppy Tagging as the legion calls it.

Numbers of legion volunteers are down this year, but it still has its goals to hand out as many poppies as possible and collect donations. Lynn Valley community members can step up to help by visiting the legion – 1630 Lynn Valley Road – any day until November 11, between 10 am and 8 pm to volunteer. Poppy taggers will be given a tray, a short briefing and assigned a location in Lynn Valley. The work is flexible for whatever time the volunteer has. Locals are also encouraged to pick up a poppy tray to take to their workplace.

“We want to give out as many poppies as we can to spread that awareness,” says Saboe. “We never turn someone away because they don’t have a donation. The goal is to remember.”

The legion would also like to invite people to visit their hall. The space is open to all – including children and can be used as meeting space for groups or a place for friends to gather. The legion has a goal to add more family activities in the coming year. The money raised through the bar, poppies and other activities supports veterans needs and is also donated back to the community to Lynn Valley groups like Argyle Secondary and Mollie Nye House, says Saboe.

Lynn Valley’s November 11 will have a full ceremony with a choir, colour party, bugler and speeches. It will take place at Veterans’ Plaza – behind the Archives building between Lynn Valley Elementary and Parent Participation Preschool, 3205 Institute Road at 10:30 am.

There will also be a ceremony at 10:30 at the Victoria Park Cenotaph off of Lonsdale Ave.