The hard work of Lynn Valley Community Association volunteers and district parks staff – and the leadership of local residents Suzanne and Gabriel Mazoret – was celebrated at Lynn Canyon on September 16 with the grand opening of the Lynn Valley LINK trail.

The trail links previously existing trail networks such as the Baden-Powell, Princess Park, Lynn Canyon, Inter-River and Kirkstone Park paths to create a pedestrian route that circumnavigates Lynn Valley. New Lynn Valley LINK information kiosks are up and running at the five trailheads that offer parking facilities – Lynn Canyon Park, Inter River Park, Kirkstone Park, Princess Park, and the Fromme Mountain lot at the top of Mountain Highway. Along with the LINK map, each kiosk features historical information and photos specific to the immediate area.

At the Saturday event, LVCA president Gillian Konst thanked all those involved, and encouraged people to join the LVCA to play a role in community projects and initiatives such as the LINK trail. She noted that the next stage of the LINK will include creating pedestrian “spokes” from the perimeter LINK trail into the hub of Lynn Valley. 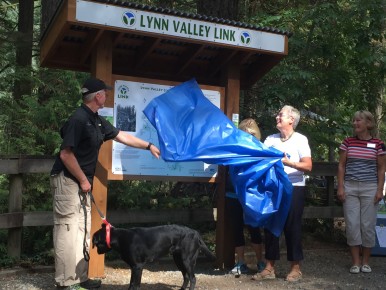 The Lynn Canyon Park kiosk was then unveiled with a flourish by DNV Mayor Richard Walton and Suzanne Mazoret. Those in attendance, including other council and provincial representatives as well as LVCA members and citizens, then retired to the park’s picnic area where a number of displays were set up by groups such as the District Parks Adopt-a-Street program and the Friends of the North Vancouver Museum and Archives. An excellent cake donated by The Butler Did It catering company was much enjoyed, especially by NVD councillor Mathew Bond who arrived on bicycle and was ready for refuelling after a good ride.

For more information about the LINK project and the Lynn Valley Community Association, visit the LVCA website.