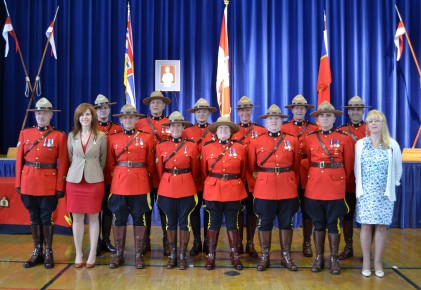 It was slipped into our email inbox like any other press release from the North Van RCMP, but this one – we think – is rather special.

Twenty-two of our local RCMP officers, employees, and volunteers were recently awarded the Queen Elizabeth II Diamond Jubilee Medal for significant contributions to their community. Here at LynnValleyLife HQ, we were especially tickled to see the familiar face of Cpl. Richard De Jong in the back row (that’s him, third from the right – click if you want a larger image!)

Cpl. De Jong is the press officer who is always happy to answer our editor’s questions about things going on in our neighbourhood, whether it is police incidents people are wondering about or the ins and outs of helicopter searches at night. We’d like to give him a medal of our own, for all his prompt and patient replies!

So thanks again, Cpl. De Jong, and congratulations to all the RCMP members for their recently awarded honours and their work to make North Vancouver a good home to us all.

Our editorializing complete, the official press announcement reads as follows…

A new commemorative medal was created to mark the 2012 celebrations of the 60th anniversary of Her Majesty Queen Elizabeth II’s accession to the throne as Queen of Canada. The Queen Elizabeth II Diamond Jubilee Medal is a tangible way for Canada to honour Her Majesty for her service to this country. At the same time, it serves to honour significant contributions and achievements by Canadians.

C.O. Deputy Commissioner Callens spoke of the selfless dedication and professionalism exemplified by all of the recipients in serving their communities. RCMP officers, civilian employees and volunteers were honoured. A total of 22 medals were awarded to various staff of the North Vancouver Detachment.