“This was, by far and away, the absolutely best Lynn Valley Day ever.”

So said an elder of the valley, who has been attending these annual affairs since the 1960s.  And to judge by the comments we heard on Saturday and in the days that followed, she wasn’t alone in her views.

A full-capacity, 500-seat Gala Dinner Dance on Friday night morphed into a family-friendly, full-day festival on Saturday, thanks to generous sponsors and the tireless work of dedicated volunteers, who laboured into the night and were up in the early morning to transform the grounds in preparation for the crowd to come.

Students from the Argyle Digital Media Academy were on board to document the centennial event (they also produced the colourful promo posters that you’ve seen around the valley!). They mounted a time-lapse camera from the home of LynnValleyLife sponsor Jim Lanctot, and were able to capture the entirety of the celebrations in the following 60-second clip, from the tent going up on Thursday afternoon to its dismantling on Saturday. Whether you were at the event or not, you won’t want to miss this minute-long whirlwind tour! (And check out our Lynn Valley Day photo album on our Facebook page, too!)

The Friday night Gala participants enjoyed a great meal from Tommy’s Catering, live dance music, and the opportunity to pull out their party clothes and – instead of going to a stuffy office function! – hang out with friends and neighbours, with complimentary limousine service at the end of the evening to ensure revellers got home safely.

Hats off to all the Lynn Valley Day movers and shakers who managed to attend not just the Gala, but arrive on time to set up the park and the pancake breakfast early the next morning. (One intrepid LV Lion started his park duty at 5 a.m.!)

For a peek into the Gala night, have a look at this next super video put together by the Argyle students. (Check out some of those dance moves!)

Despite last-minute scrambling when breakfast organizers discovered they had no water supply because the District had just re-keyed the locks in the rec centre, the pancakes got mixed, poured and flipped for the early risers.

As always, the Lynn Valley Black Bear Band was out early to serenade the pre-parade crowd, kicking off a day that was jam-packed with festivities. From balloon artists, to magicians, to musicians of all stripes, event co-organizer Bob Rasmus of the Lynn Valley Lions says that the day offers attendees over $12,000 of free entertainment.

And according to parade organizer Terry Nichols, the 57-entry parade was the largest he’s ever marshalled, with groups calling at the last-minute to be allowed in. “I have never had such a big parade,” he said at the organizers’ debriefing meeting held last night. “I let it get up to 57 because I was in a good mood.”

The good mood continued with the awarding of cash prizes to top parade entries. Best Entry goes to Ferguson Moving and Storage, Most Entertaining to Freddy Fudpucker and his band, and Best New Entry to The Living Lab. And Terry event added a new category, Best Walking Group, to recognize the Argyle Pipers football team. Led by a piper and featuring the cheerleading team, the school principal, and the school football team, Terry says they were “exceptional for a first-time group.” He also awarded thank-you plaques to five organizations that are long-time supporters of the parade and consistent with strong entries: RBC, Zazou Salon, 30th Seymour Scouts, Lynn Valley United Church, and Brockton School. Congratulations to all!

Just some of the other highlights from the day were the dog agility show, the car show on Institute Road, free games and races for all ages, a flash mob, and the colouring contest, which had over 80 entrants. And one of the most memorable moments included the power outage that saw the Bouncy Castle deflate (more than once!) – fortunately not harming any of the resident children in the process!

The North Van RCMP’s media relations officer, Cpl. Richard De Jong, says Sgt. Paul Duffy was the proud Red Serge-clad officer in the parade, and he applauds the work of the many Community Policing and Auxiliary Constable volunteers who were out in force at Lynn Valley Day, answering questions and introducing kids and adults alike to the RCMP Safety Bear. (Cpl. De Jong also encourages people to call the Lower Lonsdale Community Policing Office at 604-969-7464 if they are interested in joining their ranks!)

While final revenue numbers won’t be available for a little while, Bob Rasmus does say “It was a very good day.” 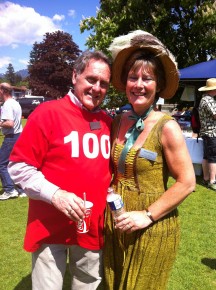 “We were well within budget on everything,” he said. “The only area we went over budget was in the revenue category.” A main beneficiary of the day’s success, he says, will be the North Shore Rescue Team, which is fundraising for new facilities in the North Van Works Yard.

Even though the event was a resounding success, the Lynn Valley Day planners are already hammering out what will be done to make things run even more smoothly next year. Once again, LynnValleyLife wants to thank the organizers for the thousands of hours they have collectively donated over the past number of months to make the weekend festivities a reality. Please have a look at our tribute to the event hosts, and think of ways in which you can support the work of the Lynn Valley Lions and the Lynn Valley Community Association.