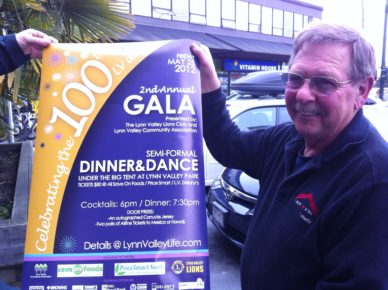 FROM THE EDITOR: If you’ve attended a Lynn Valley community event any time in the past two decades, chances are you’ve crossed paths with a Lion – a certain Lynn Valley Lion, that is.

Bob Rasmus is known to many as the former owner of RJR Contruction Management, a company he and his wife Peggy ran for many years before his retirement in 2010. But he’s probably met even more people through his role in the Lynn Valley Lions, the community service club he joined in 1990.

It all started when he built a house for a client over in Vancouver. When Bob presented his bill, the client told him “I’ll pay it as long as you join the Lions Club.” Bob took up the challenge, and – having moved to Lynn Valley in 1976 – joined the club in our neighbourhood.

Payment of invoices aside, Bob says “One of the reasons I joined is because I was making my living from the community, and I wanted to give back to the community. I think a lot of people feel that way.”

Many people may feel that way, but we suspect Bob may have given back more than most. Currently the secretary of the 31-member club, and zone chairman for the larger community of local Lions Clubs, Bob has been president of the Lynn Valley Lions three times, most recently last year. As of writing, he is working 10-hour days organizing the 100th Lynn Valley Days celebration on May 25/26 – but that didn’t stop him or his fellow Lions from setting up their infamous Cook Shack for Lynn Valley Village’s Easter weekend festivities. (For more about the Lynn Valley Lions and their role in the community, click here!)

Bob’s history of volunteering pre-dates his Lynn Valley Lions days; father of two, he was a baseball coach and Scoutmaster, and a participant in the YMCA’s “Indian Princess” program for fathers and daughters.

It was a circuitous path that brought Bob to our neighbourhood; born in Portage La Prairie, he left there for Mission when he was two, then moved to Vancouver in 1966 and to Lynn Valley a decade later, where he lives on Alderlynn Road.

Since arriving, Bob and his fellow club members have done a great deal to improve our community. We can only imagine he’d love to issue the same challenge to our male readers as he received all those years ago – “Join the Lions Club!” Even without the motivation of an outstanding invoice (!), we hope you consider taking him up on it.