B.C. Mills House: a step into the past 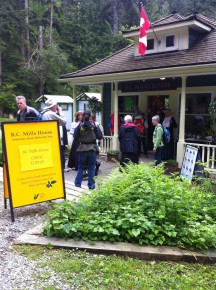 The B.C. Mills House Museum, a hidden reminder of Lynn Valley’s history, is located near the entrance of Lynn Valley Headwaters Regional Park.

Originally purchased from a 1904 catalogue of the B.C. Mills Timber and Trading company, it represents the first prefabricated house on the North Shore.  It was purchased and built in 1908 by Captain Henry Pybus as a home for his family.

Later, it was converted to a schoolhouse and still later became the political headquarters of the infamous Rhino party. After  many years of neglect, the building was to be torn down. However, Stella Jo Dean, a councillor of North Vancouver City at the time, suggested it be moved to the newly established Lynn Headwaters Park to serve as a historic reminder of the early lumbering days.

With the approval of the planning department and the physical resources of the 6th Field squadron of engineers, the building was dismantled, reassembled and refurbished in its present location. 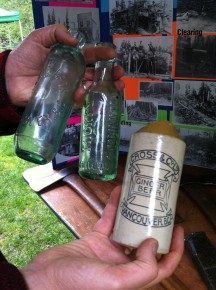 Over the next few years, various hikers and interested persons started bringing  to the museum  a variety of artifacts found in the woods  – objects that dated back, in some cases, to the late 1800s!

Subsequently an inventory was created of all these items and became available about the time the museum opened in 1998.

Items have since been added and an update of our inventory is becoming a necessity. Although storage and display space is limited, the museum still lures visitors from a broad geographic region – many of whom have loggers as their forebears.

The museum is staffed by a few keen volunteers on Sundays and statutory Mondays from 11:00 a.m. to 3 p.m. from May to September. If you’d like to join us, just see our notice, below!

Spend the occasional Sunday afternoon in the park, and learn more about how our forebears first made their living in this part of the North Shore!

Join the group of avid volunteers at the B.C. Mills House Museum as an occasional host from May to September, on Sundays and statutory Mondays from 11 a.m. to 3 p.m.

The volunteers’ aim is to provide information about the early logging and mining history in this area. Experienced volunteers help newcomers become oriented to the program.

Volunteers also provide park and trail information to the many hikers and dog walkers who head out into this large wilderness region.

To obtain further information about this opportunity, contact West-Area Metro Regional Parks at 604 224-5739, or just drop into the museum during the open hours.