Bears at risk in Lynn Valley

This past weekend, the plan was to kill Lynn Valley bears. Two traps were set up Friday night. It’s becoming an all too common problem. The last weekend in July a Lynn Valley bear spent its day as high as it could go in a tree, trying to evade the traps and guns of conservation officers. Neighbours of the ongoing incident were watching. One placed a quick call and soon Luci Cadman, executive director of the North Shore Black Bear Society (NSBBS), was also on scene, advocating the best she could for a bear with a death sentence and educating the homeowners with unsecure chicken coops (DNV bylaw require an electric fence) that created the situation.

The images and anecdotes are flooding social media – but bears aren’t new to Lynn Valley. These furry neighbours will – hopefully – always be a part of the community and we can all master more best practices to live alongside them.

Bears have been a part of the community since well before settlers arrived in Lynn Valley. The headlines and viral images we see today aren’t really a matter of more bears, but of more reporting, said Cadman.

“On social media, we are seeing more images as more people are out in the summer,” she said. “But the bears have been active since February.” 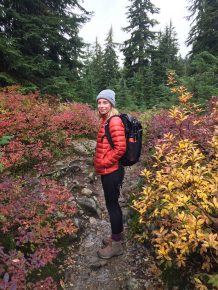 We will always have bears in our community – always because they are here for safety whether there are unnatural food sources or not, it’s a natural place to be, said Cadman.

“We are seeing a pattern of people being at home and Dr. Henry encouraging people outside. Especially in areas like Capilano Regional Park, Mosquito Creek, Braemar, Fromme Mountain, Lynn Canyon Park, there are reports of more daytime bear activity. I believe recreation is pushing bears out of the forest into the community where it is a little bit quieter. We see bears are just resting at the back of people’s yards away from the hikers, bikers, and dogs. They are seeking peace and quiet and going back into the forest at night.”

The society also noticed in 2020 the impact of closing provincial parks led to unsanctioned bike trails on Mount Seymour pushing local bears into neighbourhoods. During education outreach at trailheads, Cadman also has had a number of reports from the public of misinformed individuals aggressively moving bears from their natural areas and food sources with airhorns or bear bangers because the public wants to recreate in the area.

“The bears in Lynn Valley are the more vulnerable bears, the mom, and cubs, the teenagers, older bears, right now there is an injured bear. These bears live on the periphery of our environment and can’t go higher up in the mountains because that is where the dominant bears are.”

When it comes to the dangers of living with bears, there are few. It is far more dangerous for the bears to live near us, said Cadman. In 2019, 542 black bears and 162 grizzly bears were killed in BC.

“We have the statistics,” she said. “They are in the community without incident, their intention isn’t to hurt people and we know this because we get hundreds of reports every year without incident. It is very rare for a black bear to make physical contact.”

Even those bears people think are dangerous are not – statistics show a mother bear is the least dangerous bear – her instinct is to retreat from humans. They live near neighbourhoods because it is less dangerous for her – away from dominant bears, said Cadman.

It’s up to us, as residents, to facilitate cohabitation.

The NSBBS believes education will lead to our best co-existence with bears and the role the public can play has evolved over the years, said Cadman. 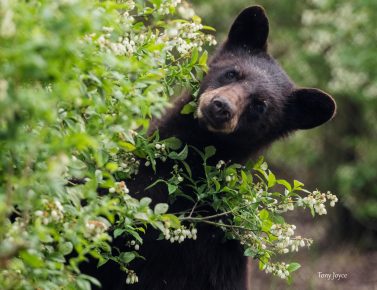 “These animals are teachable. They are very intelligent. Back in the day it was bang pots and pans and used an air horn but many of our bears are adapting. Don’t expect a bear to run away,” she said. “If they did that every time they saw a person, they would get nothing done. They are comfortable with people – at a distance – never step into their space.

“Just because a bear is walking down the street in the daytime does not mean they are bold or aggressive.”

If a bear does enter your yard, Cadman offers this advice: “From a safe place like a deck or window, with eye contact and a firm tone, speak to the bear [in any language, as the key is tone, not words]. It will usually move on. They can be taught this is not a place to be. Be consistent and do it every time they are in your yard.

“We have had a lot of success with bears changing their routes by people doing that.”

If you meet a bear in the wild it’s a different procedure and likely not the one you learned as a kid. The typical thought to make yourself large as possible, to glare and threaten the bear in a loud voice is incorrect as Cadman because it may make the bear feel threatened.

“If you suddenly, closely encounter a bear on a trail or in your yard speak in a calm tone and slowly back away,” said Cadman, adding this behaviour allows you to demonstrate you are giving the bears their space to carry on.

There are numerous challenges facing local bears, says Cadman. Some are institutional, like the BC Conservation Officer Service (BCCOS) and local governments, others are more about individual resident actions.

“People believe that conservation officers relocate bears,” she said. “In June of this year, in BC, 75 bears were killed. Only one was relocated.”

The false assumption by residents that bears will be relocated leads to behaviours that put bears at risk.

“We always try to educate and I have heard it before, ‘It’s not a big deal [the bear is trapped], it will be relocated like last time,’” said Cadman. “No, the bear will be killed, just like last time.”

She also struggles to get accurate reports on bears from the BCCOS so she can direct the NSBBS’s finite education resources to where it’s most needed.

“If people don’t report the bears to us, we don’t know what questions to ask the BCCOS,” she said. “We can’t hold them accountable.”

The District of North Vancouver is making progress to be more supportive of bears cohabiting in the community but there is still more work to do, she said.

“In January the district passed a bylaw regarding bear attractants and they are using it as a next step when our education isn’t working. First, we want people to talk to their neighbours, but if that isn’t working they can let us know or the DNV and we can provide education. We send a welcome package to all new residents to help them understand bears in our community. We are still working with the district to improve the waste bins. The locking waste bins are not bear-proof and continue to be a problem.”

Revisiting last month’s bear visiting chicken coops, Cadman is pleased to have the bylaw in place, as education didn’t seem to be working.

Bears are in our neighbourhoods from late February to November. They need year-round support. The NSBBS is slowly expanding its small team of volunteers.  Donations are a quick way to make a difference. Self-education can be found on their website (new site coming soon).

There are actions residents can take now to support our bear neighbours: