Bury the Dead: Stories of Death and Dying, Resistance and Discipleship has been a labour of love for the Rev. Laurel Dykstra. An experienced writer as well as recently ordained Anglican priest in North Vancouver, Laurel edited this anthology of first-hand  experiences of death, from an American hospice worker’s reflections to the memoir of a family who cared for a mother at home, taking unto themselves those tasks usually delegated to healthcare professionals and undertakers. 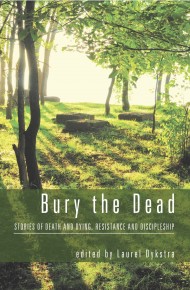 The B.C. launch of Bury the Dead will take place Thursday, December 5 at 7 p.m. at the Lynn Valley Library. The launch is the first in the Really Important Events series sponsored by the North Vancouver Anglican-Lutheran region, which will feature presentations and workshops on end-of-life issues.

People are thirsty for these conversations, it seems; a recent ‘Death Cafe’ held in North Vancouver drew an overflow crowd and a waiting list to boot. LynnValleyLife editor Peggy Trendell-Jensen spoke to Laurel about her book, and the need people have to share stories of this kind.

How did you come to edit this book on death? What is its reason for being?

This book began with a phone conversation. I was a mentor in a program for young Christian activists, and one of the young women I was mentoring, Lydia Wylie-Kellerman, was struggling to write about her mother who was diagnosed with brain cancer when Lydia was twelve and died when she was 19.

Meanwhile I was struggling after the deaths of three women I know who had died in the Downtown Eastside. Reflecting later on the conversation, I realized that the two of us were actually connected to a network of individuals and communities on the radical Christian left who had, for many years, in hospice rooms, war zones, and prison cells, been attending to the work of death and dying. I sent out an exploratory e-mail to some other likely suspects, asking, “What if we made a collection of stories about dying and community, would you write something?” The response was immediate; by next morning six people had promised to write, and three had attached sample chapters.

Did your concept of death evolve over the course of editing the book?

In starting the project I imagined that it would be cathartic. I thought I would be able to let go of some of the stories of death, particularly urban poverty-related deaths, that I had been carrying for years. But instead, contributors began sending these amazing stories of their own beloved dead, so instead of putting down my own story I found myself picking up theirs.

My feelings and ideas about death did not change over the course of editing the book, but I found a tremendous hunger for people to hear and tell these stories. Whenever I talk about the project, I am approached by people who want to talk about death. Care for the dying and the dead is outsourced to professionals and removed from our homes and families. Grief is individualized and something you are expected to “move through.” We are not encouraged to ask questions about own connections to, and culpability for, death by poverty, war and even disease. 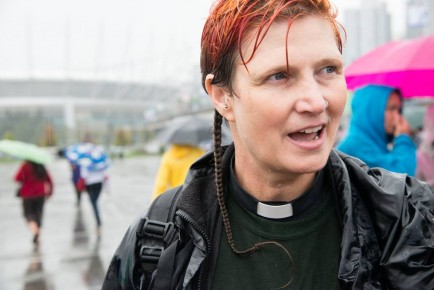 How did you find your writers?

I began with the circles of activists I know through various peace and justice movements in North America—Occupy, Anti-War, Catholic Worker, Civil Rights – and those connections led to others.

What story or moment(s) in the book do you find especially poignant or thought-provoking?

All of them. Through the somewhat technical work of polishing and editing the book I found that as I worked on it, each contribution was my favourite. And each time I open the book now I think, “Oh, I love this piece.”

That said, there are two things I would highlight:

Several contributors engaged in hospice work talked about what they do as “reverse midwifery” or being “midwives to the dying.”  I find this particularly beautiful and I think it represents language and thinking that will become more and more common.

I am particularly impressed as well by the power of the contributions written by some of the people of colour, and the different ways that they challenge the deathliness of racism.

What are you hoping the book accomplishes?

I think of it as the first in a series of conversations with more and more diverse conversation partners.

What has reaction been from readers to date?

Quite positive—it has been reviewed in Geez magazine and an excerpt has been published in Sojourners. People are hungry for these kinds of stories and a place to tell their own.

How do you hope society changes in its attitudes or actions around death?

Would you call this a ‘religious’ book?

The majority of contributors identify as Christian activists, but Jewish, atheist and agnostic friends have read and loved it. The authors talk about God, Jesus, the Bible, Christian social teaching as well as diapers, protest strategies, gun violence and coffin materials. This is not a book that tells you what to believe, but it grapples honestly and painfully with questions of life, death and resurrection –  so in my opinion it is a profoundly religious book.