Clean out your closets and support local charities

You have no doubt seen charity drop-off boxes all over the North Shore on your walks or drives around town. 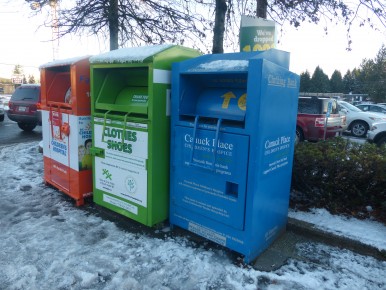 You can drop books, shoes and used clothing in them in for re-use by someone who needs them. Not all these boxes are for charities, however; some are for commercial for-profit companies and the difference is not always as clear as it should be, so a careful reading of the information on the box is important.

The donation boxes found outside Winners at Lynn Valley Mall are all for reputable, non-profit charities, operated by commercial firms. There are three of them in a row, so take your pick. The orange box is maintained by the BC Children’s Hospital Auxiliary. On the front of the box there is a sign clearly stating their charity is 100 per cent non-profit.

The green box in the middle states it is maintained by Green Inspiration BC, and a portion of the proceeds go to the Boys and Girls Clubs of BC. You can phone Green Inspiration (778-927-2073) to learn more. Its website states the following: Clothing which is in good condition is sold and delivered to some developing countries where locals are given access to more affordable garments. Only a small portion of the donations, which are not in usable condition, are going through the process of recycling that gives old clothes a brand new life and reduces the amount of waste going into landfills. Learn more here.

The blue box on the end of the row is a fundraiser for Canuck Place Hospice. A disclaimer on the box states that the service is owned and operated by Trans-Continental Textile Recycling Limited, which donates a portion of proceeds to the hospice. If you have any questions, you can phone the company at 604-592-3008. A letter on the Canuck Place website attests to the fact that over $300,000 has been donated to the charity through this method