With years of international experience, Adam Trotter landed in Japan last month as part of Canada’s Olympic delegation. It was his second Olympics as head mechanic of the mountain bike team.

Climbing to the top

Following his bike from Ontario to Lynn Valley, Trotter has been on the road with professional teams and Team Canada since 2009. But you may have unknowingly had your bike tuned in the past by one of Canada’s top mechanics, with Trotter’s downtime often spent at Lynn Valley Bikes.

“Rio was my first Olympic Games,” said Trotter. “I had some ‘major games’ experience doing the 2015 Pan Am Games in Toronto and the 2014 Commonwealth Games in Scotland by that point so I was used to that environment as it’s quite different from a World Cup or World Championships. It was memorable for the fact we won a bronze medal [Catharine Pendrel] in the women’s race – so that was special for sure.”

“We select our staff from among people working with professional teams,” said Karine Bedard, Cycling Canada. “Adam is a trusted mechanic on the Enduro World Series and has also been part of the Canadian team for many years.” 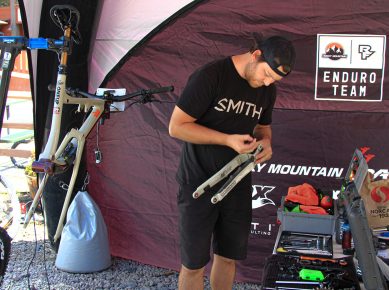 “I can’t recall where I heard this but a mechanic can’t win the race for an athlete but they certainly can lose it,” said Trotter. “I’ve got my systems in place that I used during my pre-race checks so that I’m confident that each bike that I put a number plate on is race-ready when it rolls to the line. In terms of stress, I just make sure I’m dialed and relaxed and if the riders see that then they’re chill as well. If I’m freaking out, they’re freaking out and that’s not good.”

Bedard echoes the importance of the mechanic-athlete relationship.

“The riders have to trust that their equipment is in the best condition possible, and the mechanic needs to be a calm presence who knows what to say and what not to say even in stressful situations,” she said.

“It’s just an honor to be able to support our best athletes on that stage,” said Trotter. “Athletes always say it’s special to wear the jersey representing your country and I feel the same way wearing my T-shirt.”

The Tokyo Olympics were a different experience than a typical international competition. Pandemic protocols limited how the athletes, staff, coaches, and crew could interact with each other, the events, and the entire Games itself.

“Last season I traveled internationally for some EWS races and MTB World Championships so I’m used to all the added layers of travel these days,” said Trotter. “I got my first shot in May and my second one while I was traveling in France so I was fully vaccinated by the time I got to Tokyo.”

Even for someone used to the constant travel and competition, this Olympics was a whirlwind.

“I felt Tokyo was over pretty fast,” said Trotter. “We flew in from a camp in Europe, got settled, did our training days, and we were on a plane home 24 hours after the last race. It was also unique that we weren’t in the main Olympic Village but three hours south in Izu at a summer resort transformed into a satellite village. It was just mountain bikers for the first six or seven days until the road and track athletes began showing up.” 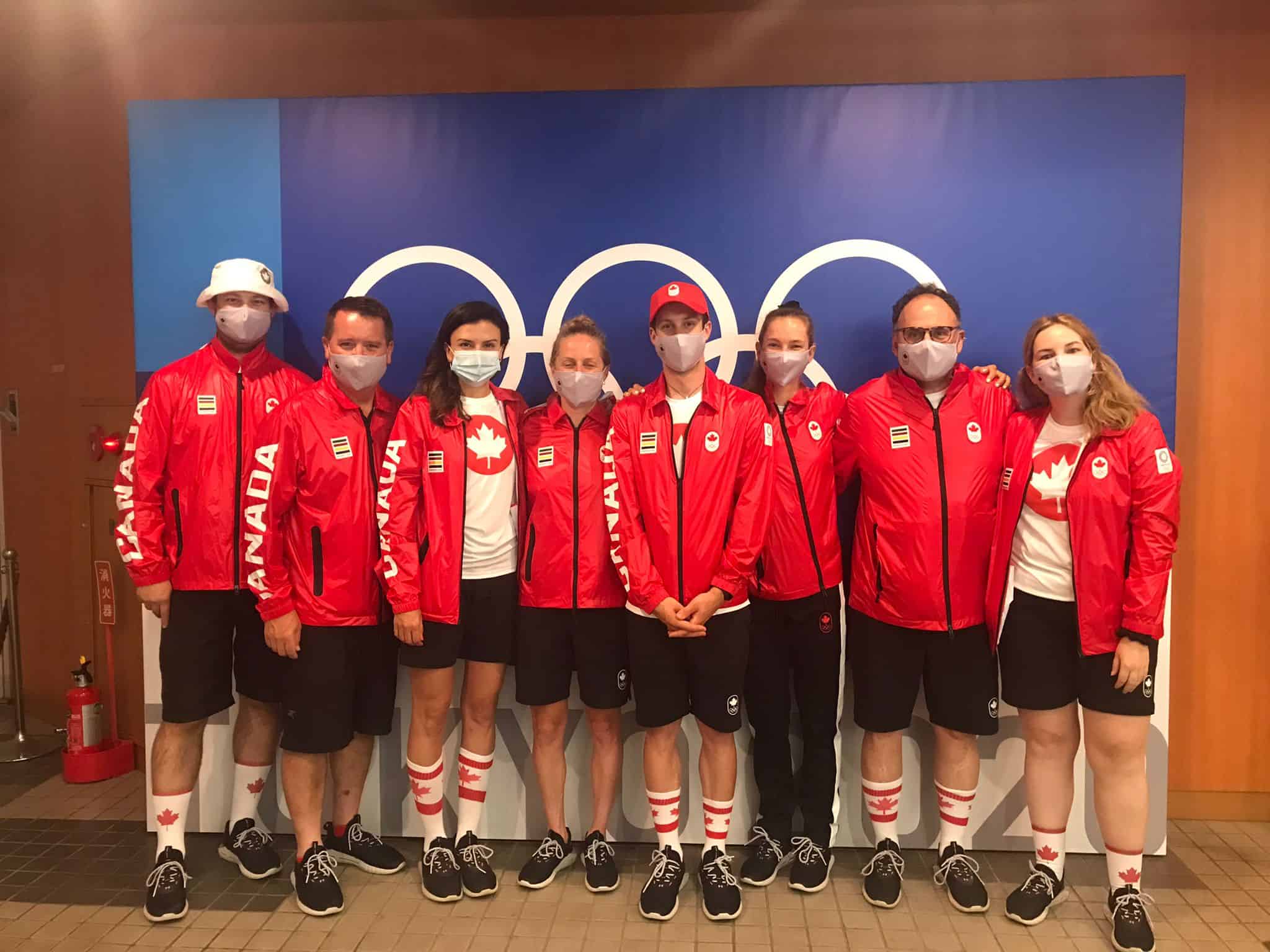 LVL: Can you describe event day from your perspective?

Trotter: The night before I wash and check over the bikes and get all my things organized for the next day – like spare parts and wheels that I bring to the tech/feed zone. Race day Tara [team physio]  and I head to the race early on the bus to get our pit area at the venue set up. The riders get driven to the race with [Coach] Dan. Then I just hang out and help as needed – putting a bike on a trainer or some tire changes. With 15 minutes to start, I’ll walk down to the tech area and set up my tools and spare wheels. Sometimes I help with bottle feeds.

LVL: Can you describe the relationship between elite riders and their mechanic?

Trotter: All the athletes we had at the Olympics I’ve worked with plenty over the years on National Team projects. I know how they operate on race days and as people. Some racers like to talk and joke around before a race, some just tune out and get in the zone. Andreanne [ALN] is one of the athletes I work with on the Rocky Mountain Team and I’ve known her since she actually raced XC on the National Team before switching to Enduro. She calls me her psychic, just from working together for so long. It’s also a relationship where communication is important. They need to be able to talk to you about bike stuff, set up, tire choice, and you need to be able to understand them as well.

Of course, they also have to trust you that their bike is going to perform as well every single time you hand it back to them.

LVL: Were the crew and riders as surprised as they appeared to be on TV about the removal of the ladder between training and racing? [During training runs a boulder leading into a drop had a ladder eliminating the drop. Not all riders appeared to be informed of the change, resulting in some crashes.]

Trotter: I haven’t actually watched the coverage of the race. I do find it strange that they took it out, but also strange that it was there in the first place.

Just like the athletes, Trotter’s 2021 mountain bike season is continuing as he heads to Europe this week. When it wraps you might see him at Lynn Valley Bikes, riding the Shore, or hanging out at home in Lynn Valley.

“The trails are right here, the riding community is amazing and having a bike shop in the area is awesome! I’m a mountain biker for sure,” said Trotter. “It’s really why I moved out here from Ontario. I love a good Seymour lap, my favourite trails are over there.”