We are collecting nominations for Lynn Valley’s Good Neighbour Award until Dec. 19, 2012. We’d love to hear, and share, stories about good-hearted folks who have gone out of their way to help you or their community, in ways large or small. They don’t have to be your ‘next-door’ neighbour, just a fellow Lynn Valleyite. The winner of this year’s Good Neighbour prize package will be drawn at random, and announced on Dec. 23. Please send your submissions to [email protected]

“We would like to nominate Patty Hopper for Lynn Valley’s 2012 Good Neighbour Award.  Patty is a beautiful person, an exceptional role model, a fun and loving friend, a powerful business woman and most importantly a wonderful daughter, sister, mother and wife. It must be really hard to be so exceptional at all those things, but Patty makes it seem effortless. She exceeds expectations in every category of life and gives back to the community she lives in every day! Patty sets the bar high and we could all learn from her and her success’  and positive outlook on life.”

Patty is Vancity’s local mobile mortgage specialist, who lives here in Lynn Valley. Her fans at our LV Village branch went on to share with us a PowerPoint they had created about a project Patty launched in memory of her best friend’s daughter, Ashley Lowey – a cause you can support this Christmas and all year ’round!

“During the times when her eldest daughter was hospitalized, Lori Lowey called on her friend, Patty Hopper.

As Ashley Lowey, Lori’s eldest daughter, bravely battled cancer during her teens, the illness often brought her and her mother to B.C. Children’s Hospital, often without warning, leaving her mother needing essentials.

When she visited Lori at her daughter’s bedside, Patty would pack her a bag of key items she might need: a hairbrush, comb, shampoo, make up, magazines, deodorant—supplies for an unexpected overnight stay, sometimes stretching out for days.

Patty would spend hours in the hospital with her friend, and saw parents come and go, often staying for days without any supplies.

“I would watch these parents coming out of showers…drying themselves with their  T-shirts,” she said.

In February 2009, Ashley Lowey lost her fight against cancer. Patty wanted to honour the teen’s memory and help other parents in need. 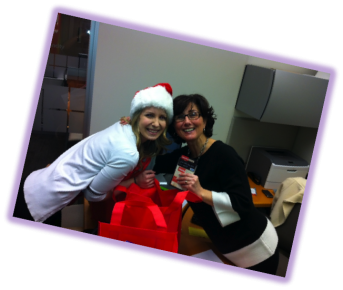 “The bag (idea) originated because Lori is my friend and I was bringing her a bag, two or three times a week while her daughter was there,” she said “Once she passed away, I just felt there was such a need for these parents to have something, you know, when they show up unexpectedly. We just started collecting stuff. It’s kind of just gone from there.”

Hopper started having parties at her house, where she and her girlfriends would bring items to put in bags and prepare them together. Slowly word spread, and  the Vancity Credit Union in Lynn Valley and the branch on Pemberton and Marine donated many bags. A local fabric company donated material to make more.

Said Patty: “It  was interesting, because the first day I delivered a box, I walked into the hospital…There was a lady standing there in the middle, and she was on her cell phone and she was beside herself. And she was like, ‘I’ve been here for four days, I haven’t been home, I have nothing, I need someone to drop me off some stuff.’ I just thought, ‘This is why I’m doing this.’”

Would you like to contribute items or a cash donation towards an Ashley Comfort Kit? Staff in Lynn Valley’s Vancity would be very happy to accept your offering. Here are suggested gifts: 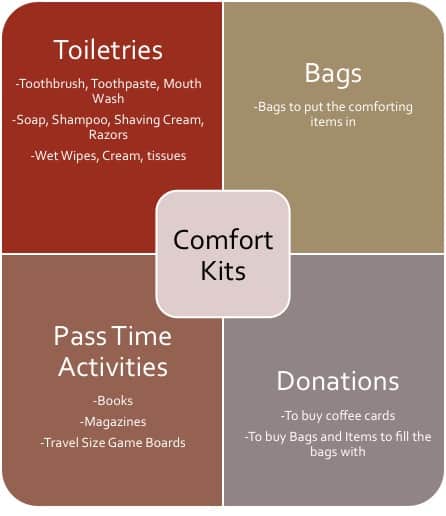