Last September the District of North Vancouver adopted a bylaw allowing for the raising of chickens in single residential homes (RS) zone. You or your neighbours can raised between four to six chickens, given the right enclosure, an electric fence and a animal permit from the district.

While the bylaw maybe new – chickens in Lynn Valley are not. It is estimated there are between 50 and 100 chickens roosting here. For now those chickens are running a-fowl the bylaw, but that doesn’t mean they aren’t thriving in our mountain community. 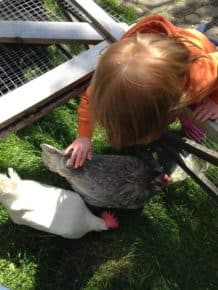 “Lynn Valley is a pretty cool place,” says Mike, a local chicken owner. “The neighbours have been quite excited about the chickens. They come visit them. When we go away the neighbours’ kids look after the chickens – they get to collect the eggs. It is quite fun.”

For about four years chickens have been a part of their home after his children won over thier parents with some hard fought lobbying and Mike completed some research.

“The ranch up in Cariboo is surrounded by wolves and caribou and all sorts of critters – so we did a lot homework about who was going after urban chickens. We talked to people and heard we needed to keep the ‘coons and the skunks out.”

Keeping ‘coons out of the coop

Between the family dog and the wildlife, using the children’s old playhouse and plenty of chicken wire, Mike got to work. 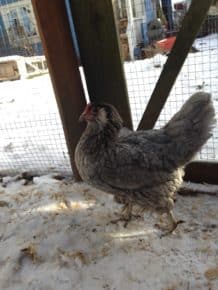 “We started down this road with a huge amount of chicken security – it was basically a high security prison,” he said. “There was a double-fence system, so if something broke through one, they’d have to break through another. Since we have socialized the dog I have rebuilt everything and made it much more friendly – a minimum security prison for the chickens.”

For his family, the biggest knock against getting chickens was their dog.

“I had family members with dog – and I thought dogs and chickens didn’t necessarily mix,” said Mike. “I have since learned that dogs can be trained to not eat chickens. We worked at it and got the dog to understand it couldn’t eat a chicken.”

In fact the dog is helpful, keeping large birds like eagles and other predators away.

The DNV bylaw requires an electric fence to protect household chickens from wildlife. The District has been working with Wild Safe BC to create a framework for urban chickens that doesn’t habituate wild animals to an easy food source. The District has also been working with CLUCK (Canadian Liberated Urban Chicken Klub).  CLUCK North Vancouver is quite active online with local events, get togethers and its website has a wealth of links including info on a veterinarian in Westview who helps exotic pets including chickens.

Everyone has a job

“On a farm they don’t necessarily draw the distinction that urban pet owners do,” says Mike. “Farmers care about every animal in their herd – they will go out in the middle of the night, they will bring them into their home if they need to. To me our chickens are like an animal on a farm but they are also a pet where there is relationship with them. They do work – they produce eggs and they have other jobs.”

While there is work in caring for the chickens, they work they do makes up for the effort, he says. In addition to eggs they eat food scraps, eat weeds, gobble up chafer beetles and dig and fluff the lawn creating healthier grass.

“They produce an egg a day – that is one tenth of their body weight,” says Mike. “They eat a lot and make an egg a day – if you think about that it is like giving birth to a kid everyday. So I have a lot of respect for them.”

Caring for chickens isn’t all meringues and the best quiche you’ve ever had. 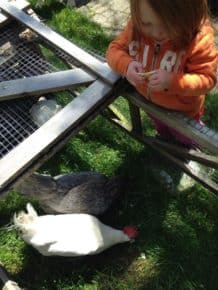 “The biggest challenge is they are rather indiscriminate with bathroom habits,” said Mike. “If they are eating that much to make eggs, they have a lot of by products and that is good – we compost it. You have to compost it for a year to get really good garden fertilizer. They wander across the patio and leave little things there and have even escaped into the house on occasion.”

Other challenges include protecting the birds from rats. Apparently rats are common in Lynn Valley compost piles. Mike has taken care to – and the bylaw requires – make the coop inaccessible to rats and to make sure rats don’t partake in the chicken feed.

Another challenge stems from chickens being a bit bird-brained.

“Because we have a dog we don’t leave gates open very often, but the chickens do wander around in the yard and they know where their coop is so they don’t go very far,” says Mike. “But they do disappear and we have chicken panics. There is a lot of things that could happen in the real world. They are not smart enough to not run out in front of a car. They are pretty dumb.”

The most common question the family gets and the number one concern of chicken opponents is noise.

“The chickens make a noise – they don’t do it that often and it’s not an unpleasant noise,” says Mike. “It’s way better than a rock band practicing badly or a diesel [truck] warming up in the morning, or kids screaming or dogs barking or a whole bunch of other things you hear in a human neighbourhood. We were worried about… it’s just part of the background and none of the neighbours seem to care – and I’d hope they would come talk to us if they did.”

The other thing to be aware of, says Mike, is that chickens are fragile – they have been bred to do one thing.

“We made the mistake of getting farm chickens, not ones bred to be pets. The first ones we had were quite weak – one died of an infection and one died of leukemia. We have two now.”

With several years as a chicken owner, Mike insists he doesn’t love them – but he does speak about them with a lot of affection.

“I’m still rather indifferent to them – but my kids would have a different answer. They are entertaining,” says Mike. “There is nothing like a fresh egg – let me tell you. An egg that is made by a chicken that is eating bugs and wandering around eating plants is a completely different thing than what you get in a store.”

Rules on raising hens in Lynn Valley can be found on the DNV website.