Out of the school yard and up to ‘Big House’

Suddenly there is quiet – 50 formerly noisy, energetic Grade 3 students have just stepped into the forest. Since they started school, the students have been told they would go to the Big House, now known as the longhouse. For months, they have been working with their teachers and special Aboriginal instructors to gain a base of knowledge they hope will transform into appreciation. The moment they begin their time at  Cheakamus Centre, it is clear this not a typical school day.

For decades, parents in the North Vancouver School District have been sending their children to Paradise Valley – first on trains; now in school buses for the unique programs offered at Cheakamus Centre – remembered by many as the North Vancouver Outdoor School. But unless you check out the Centre’s Open House, only a few lucky parents get to experience this themselves. Thus it was that LynnValleyLife tagged along with Lynn Valley Elementary on a recent visit to see firsthand what this Indigenous Cultural Program is about. 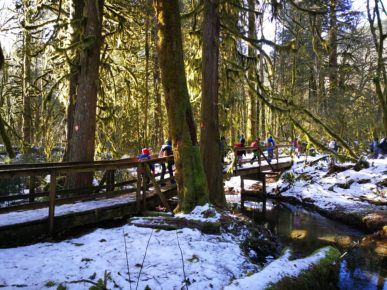 Dusted with snow, the forest glowed as the sun shone through a light fog as students were divided into groups for an interpretive walk. Indigenous Cultural Program Coordinator Sarah Davidson-James and Indigenous Cultural Program Staff Member Mathew Siýámken Williams took the groups along the Ch’iyákmesh (Cheakamus) River. It was clear which children frequently visit the forest and for which this was a rare experience – some walked tentatively on the uneven icy ground while other bounded through the snow. Every couple of minutes Mathew would gather the group to share some ecological or cultural knowledge. Students were encouraged to pick up fallen materials – like moss, lichen or horsetails – to feel or use them as Skwxwú7mesh (Squamish) people did. 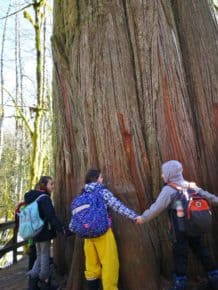 We learned what plants made what pigments for art or ceremonial purposes. Quickly there were 20 children sputtering into horsetails after Mathew shared they were used as whistles. As the walk continued to a 750-year-old cedar tree, a few clear notes rang through the forest.

The trees in this area are stunning, but the second growth looks nothing like the ancient stumps that dot the forest or one of the few remaining ancient cedars. It took about 17 students to encircle the base of towering tree.

The walk emphasized how First Nations people used and respected the forest. The students were keenly interested in how the Skwxwú7mesh people chose to use cedar trees based on their gender. Women would use female trees and men would use male trees. Another fact that resonated with the students was how Skwxwú7mesh children are taught to harvest cedar bark – people were taught to harvest a strip of bark only as wide as their two hands. If children were gathering, their strips were obviously smaller. The students could identify trees that had been harvested by Sḵwx̱wú7mesh people about their age. Experiential moments like this throughout the day seemed to foster connection – students were relating to information in a much different way than what they learn in a classroom.

Skw’une-was (the Sḵwx̱wú7mesh word for partnership), the overnight Grade 3 program is a provincially recognized program tied to the BC Curriculum, said Sepideh Tazzman, communications and marketing manager for the Cheakamus Centre. It began after a conference in 1985 of Sḵwx̱wú7mesh people, North Vancouver District educators, and a few non-First Nations guests knowledgeable in Northwest Coast First Nations culture. 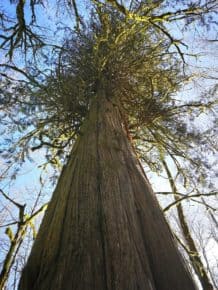 “During the conference that was the impetus for the program, participants listened to the Sḵwx̱wú7mesh people speak of their values, attitudes and ways of life as well as traditional family roles and structures, and the approach to educating by example. It also included discussions about religious beliefs and language, as well as sharing experiences of the past and hopes for the future of the Sḵwx̱wú7mesh people,” said Sepideh. “Both First Nations and non-First Nations came away from the conference with a heightened understanding of and respect for one another. The sharing that had taken place developed into the longhouse curriculum and embodies the same sense of partnership between cultures.”

Within the halls of NVSD schools the program is known as Skw’unw-was and a much anticipated highlight of the year. The program is based on three major ideas that underlie the activities at the longhouse: respect, sharing, and seasonality, said Sepideh.

Those themes ran throughout the experience, from respecting the elders by serving them their food first, to respecting the forest by leaving any souvenirs that students had gathered; sharing of knowledge and cooperating to make lunch; to discussing the changing forest and work needed to survive there throughout the year.

A big takeaway for all the students was how Sḵwx̱wú7mesh people had to be patient and plan – nothing was instant like today’s culture. If you wanted a blanket it took five years to gather the wool and another year to weave, according to Mathew. If you wanted to weave hats or mats the cedar had to be harvested and dried for a year before you could get to work. 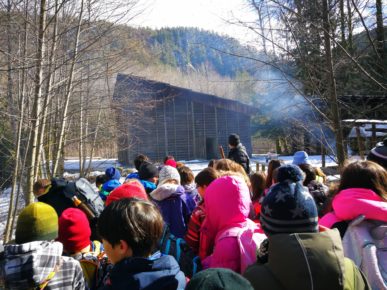 The whispers begin even before the field trip forms go home. They have heard from older students…. The smoke…. The fire….The longhouse. In a day of many memories, the longhouse at Cheakamus Centre leaves the most lasting impression. The imposing – yet cozy – structure is the centerpiece of the program.

The students were greeted by Sḵwx̱wú7mesh Elder Henry Khapquolanogh Williams at the bridge leading to the longhouse. Students announced their arrival and he welcomed them to the longhouse and invited them in. The dark, open room was hazy from smoke and warm from fire.

Inside Mathew explains the history, some basic building techniques, the core ideas of communal living, the astounding fact that longhouses were moved – sometimes on canoes – to different parts of Howe Sound and Burrard Inlet seasonally. Students were given an overview of Sḵwx̱wú7mesh life, beginning with food. 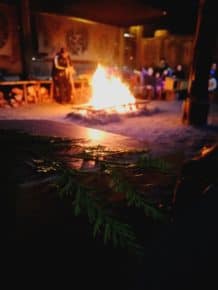 If you ask the kids, the most exciting moment of the program was seeing parent volunteers pull glowing rocks from the fire. Students carefully wiped ashes from the stones with cedar bows, before they were placed inside a pot with water and vegetables. Within a cooking box the veggies boiled and cooked while the children roasted bannock over the fire.

Inside and outside the longhouse students cooked their bannock while Mathew explained Sḵwx̱wú7mesh people originally made bread from a flour made from the alder tree and a lichen commonly called old man’s beard. The memorable meal was topped off with salmon prepared by Cheakamus Centre staff. 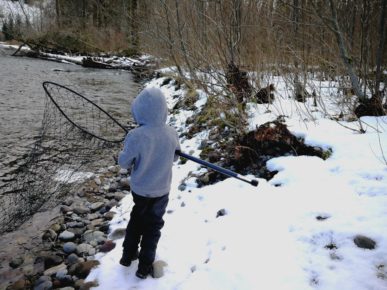 Another key piece of the program is experiencing the traditional day-to-day tasks of the Coast Salish people. Groups of students were able to participate in two experiences, choosing from Plant Gatherers, Wood Workers, Cedar Bark Workers, Wool Weavers, or Hunters/Fishers.

Mathew took the Hunters/Fishers down to the river. It was a humbling moment to learn Sḵwx̱wú7mesh means “People of the Fish Weir” while learning about how they would traditionally fish. The students were awed seeing Mathew pull an obsidian arrowhead from his pocket. They scoured the beach looking for basalt, that flakes in a similar way, and a rock to make their own. After seeing an American Dipper fish on the river it was time to head back and try their hand at weaving. 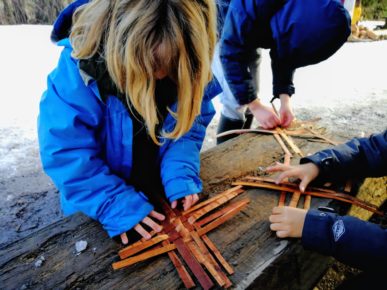 Alongside the longhouse and the outdoor cooking fire, students settled into patiently weaving cedar strips. The slow practice was carefully guide by Elder Henry. He shared photos of elaborate projects inspiring the students to focus harder on their works.

Time at the longhouse flies by. Students, parents, teachers and cultural staff gathered around the longhouse fire one more time to share thoughts of the experience. The take-away from the program is that it fosters an appreciation and understanding of First Nations. The personal stories and anecdotes from indigenous cultural staff and elders help students understand that while they are experiencing a portion of history, they are still learning about issues relevant today – jaws dropped across the fire when Mathew shared there are only seven fluent Sḵwx̱wú7mesh language speakers left. These experiences push some kids out of their comfort zones and invigorate others with a deeper understanding of the forest they love.

With hair scented with wood smoke students filed back on to the bus with exclamations of this being the “best trip ever.”  Osieum (“Oh-see-em”) to Cheakamus Centre and NVSD for sharing it.