Many of you by now will have heard about the plight of Chelsea Steyns, a North Vancouver mother who grew up in Lynn Valley and has in the last few years borne not one, but two sets of twins. 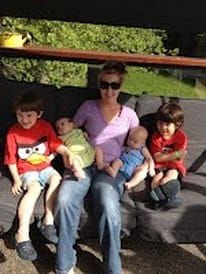 Having two twin births isn’t the only amazing thing Argyle Secondary grad Chelsea has done – she is also well known as a highly accomplished dancer and, since 2008, the greatly respected creative director of the North Shore Academy of Dance.

But tragedy entered Chelsea’s life just three months after giving birth to her youngest children, Cash and Maxine, early this year. At that point doctors discovered she was suffering from an extremely rare, inoperable brain cancer.

Since then, the North Van dance community, along with Chelsea’s other friends and family, have rallied in force to raise the money needed to fund costly treatment in Texas. The therapy she is undertaking has shown great promise in its ability to battle her particular type of cancer, but as it is still in the trial stages, it is not insured.

The next big fundraising effort will be an incredible, star-studded evening of dance and delicacies at the Kay Meek Theatre on Saturday, Nov. 3 at the Kay Meek Centre. Along with performances from about ten professional dance companies and individuals, audience members will enjoy valet parking and complimentary wine and hors d’oeuvres during a silent auction reception. Tickets are $100; details and more information about Chelsea and the evening’s performers can be found at the Live Love Dance 2012 website.