A full house packed North Vancouver District council chambers on Tuesday, March 18 for the public hearing regarding the redevelopment of the Lynn Valley United Church property.

At stake is the rezoning that would allow the church to proceed with plans for a new church building facing Mountain Highway, bordered on the north and west by a four-storey multi-family complex. Included would be 75 one, two and three bedroom units, four of which would be sold to the North Shore Disability Resource Centre at cost for use as affordable, accessible rental housing for their clients. Also included would be enhancements to the riparian area around Hastings Creek.

At the outset, North Vancouver District Mayor Richard Walton apologized that the public hearing was inadvertently called during the spring break vacation, the result of trying to schedule an evening in between councillors’ other travel commitments. Having heard that some of the church neighbours living in the complex at 3275 Mountain Highway were unable to speak due to the school holiday, council voted at the end of the evening to continue the matter with further submissions accepted at a second hearing night on Tuesday, April 1. 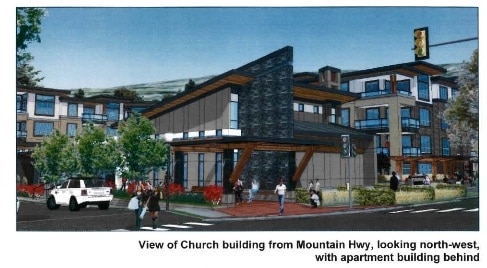 Over the course of last night’s proceedings, council heard many presenters from the church passionately speaking about their vision for the church and its ministry in the future. Rod Pearce pointed out that the church members had not spent six years developing the proposal for personal gain, but to provide Lynn Valley with an amenity that will play many roles in benefitting the wider neighbourhood, from flexible meeting and performance space to community-building programming.

“Lynn Valley United [will] in reality [be] a community centre and community amenity. But it is a community centre that receives no public funding. In fact,” he said, pointing to amenity contributions and long-term residential tax revenues, “this project will provide significant revenue for the public coffers.”

Shauna Gringke says the congregation has been learning to “do church differently” over the past few years, through such offerings as the ongoing Friday Night Live musical improv nights. “We’re generating momentum on this journey,” she said, noting that local businesses are starting to proactively approach the church to sponsor upcoming FNL seasons, recognizing the shows as unique and uplifting community gatherings.

Other people speaking in support of the project included those advocating for local disabled citizens; Suzanne Klassen of the North Shore Disability Resource Centre noted that the Metro Vancouver housing waitlist for people in wheelchairs has increased 400% over the past seven years, and called the project a “tremendous opportunity” for people to live “comfortably and securely in their own community.” 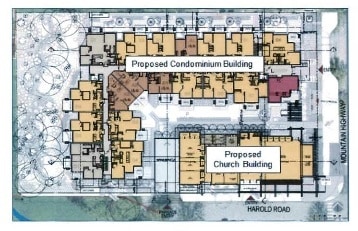 While expressing support for the redevelopment, a number of parents from the Rainbow Corner daycare housed on the church property spoke to their deep concern about the potential loss of daycare spaces in Lynn Valley. They were informed by North Vancouver District staff, however, that the church’s developer, Marcon Developments, and North Vancouver District had worked together to plan for a new daycare on site at the Lynn Valley Recreation Centre at Mountain Highway and Frederick, with the modular building financed by the developer. Should the project be approved, it was noted that the new daycare would be in place prior to the demolition of the current church building.

“Branches” resident Hazen Colbert was concerned that without a re-look at the underground parking proposal, some residents of the new complex might end up relying on street parking. A reallocation of residential versus visitor parking stalls in the planned underground lot, he suggested, would “have considerable impact on public peace.”

During the latter part of the hearing,  council heard from some of the residents of the 36-unit Hastings Manor, located beside the church’s gravel parking lot. One resident brought a petition with 28 names on it, which he said represented those people in Hastings Manor who objected to the redevelopment.

Jonathan Lindsay said people in his building would be “highly affected” by the erection of a neighbouring complex, which would be half a storey in height above Hastings Manor, currently the tallest building in the area. Some of the impacts he described included the loss of sunlight, privacy, and some of the trees at the rear of the property, and an increase in parking difficulties, given that his own building does not have enough stalls and residents often rely on street parking.

Two other speakers claimed that the church trying to make money at the expense of its neighbours, and that although planners met with the Hastings Manor strata council on two occasions and had a neighbourhood information night, their concerns have not been adequately addressed. One speaker described the proposal as “ridiculous,” and said that the church should not be trying to force council to change bylaws to accommodate its vision.

As the public hearing was adjourned at the end of the evening, Mayor Walton advised the assembly that council may still receive written input on the matter. Oral presentations may also be made on Tuesday, April 1, when at 7 p.m. the hearing will take up where it left off. While people may not redeliver the same information they have already presented to the hearing, new speakers and previous speakers who have new information to impart will be accommodated. For more information about North Vancouver District’s public hearing process, and how to present, click here.

For project drawings, description, and a staff report on the proposed redevelopment, scroll to page 175 of these council minutes.