You’ve probably heard about this scam before. But when it hit too close to home last week – twice – we thought a reminder was in order.

Here’s how it goes: The phone rings, and the homeowner – a senior – reaches over to pick it up. The caller states that they are a grandchild, or a niece, or a nephew, and they are in trouble. They’ve been in an accident or jailed for a misdemeanour or pinched for drunk driving, and they need money urgently. They don’t want you to tell anyone else in the family, because they are too embarrassed. Just go down to Western Union, send two or three thousand dollars, and all will be well. Thanks, Grandma! 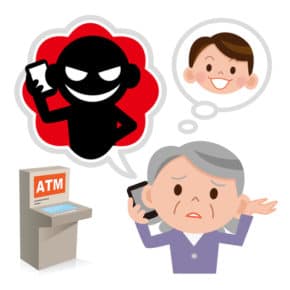 When I’d read about this ploy in the media some time back, I shook my head and wondered (a) how a person could be so morally bankrupt as to play upon a senior’s emotions like that, and (b) how the senior could be fooled by someone who doesn’t sound like their young relative. After hearing from a dear old friend who was very nearly duped last week, I am even more upset and incredulous over the first question. But I have a much better answer to the second.

The story was recounted to me over restorative Dairy Queen sundaes. That morning, my friend Mrs. M. had received a phone call from someone claiming to be her grandson, X. “But, X,” she said, “It doesn’t sound like you.” Well, X explained, sounding distressed, he had been in a car accident, and broken his nose.

The accident had been his fault, but he was with a lawyer now and being told that if he could pay a $3,000 fine that afternoon, he would escape having a criminal record. He put another fellow on the phone, a “lawyer” who confirmed what X had said about the solution to his legal troubles. X came back on the phone. Could she please, please, please send the cash via Western Union? And please, he emphasized, don’t mention it to Mom and Dad – he was really embarrassed and wanted to get this dealt with before he broke it to them.

My friend was in tears before the phone call was out, distressed about his predicament and anxious to do whatever she could. A taxi was quickly summoned for a trip to the bank. Another one took them to the Western Union counter at Walmart. And it was there they learned the truth.

Mr. and Mrs. M. have nothing but praise for the Walmart employees who were staffing the counter that day. Right away these two women made a delicate inquiry as to the nature of Mr. and Mrs. M’s business. On learning it was to divert funds to a grandson, they broke the news to them that they had been conned by a fraud artist. Unfortunately, they see it so often that they can spot the victims a mile away. Some seniors, they said, are still so convinced that their young relative is in trouble, that they can’t be dissuaded from sending the cash.

If hearing about this experience wasn’t bad enough, I returned home and learned that some neighbours had also been hit a few days earlier – this time by a ‘nephew’ who had broken his leg and was halfway to convincing Mr. Y that he urgently needed a couple of thousand dollars delivered to a friend who would pick it up at their door. Fortunately, Mrs. Y grabbed the phone and listened before shouting “You bugger – come over here and I’ll break your neck, too!”

Incredibly, they told me about yet another mutual friend who had just received a similar phone call. I still haven’t figured out how someone’s conscience could allow them to do such a rotten thing. But here’s what I have learned:

1. Don’t assume that because you’ve heard about a particular scam, everyone else has as well. Mr. and Mrs. M. read the papers, listen to the radio and watch the news on TV every day, but they had never heard about this method of phone fraud.

2. Don’t imagine that you can predict who is or isn’t likely to be taken in by such a scam. All my friends mentioned in this story are pretty savvy people with a great deal of collective wisdom under their belts. But these con artists are slick, and they have a convincing lie to explain away any inconsistencies or answer any questions one might have. When emotions are high and one is panicked with worry for a relative, any of us might do anything. 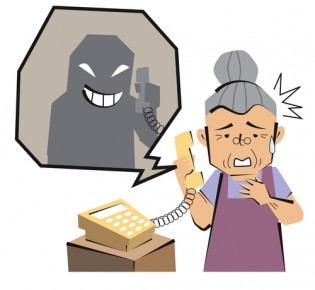 So I’m encouraging all of us to have a chat with our older friends and neighbours to make sure they understand this kind of scam is going on. Having heard of three local instances in one day, I asked Cpl. Richard De Jong of the North Van RCMP if we were in the midst of a rash of occurrences, but apparently not – these cons are, sadly, an ongoing problem. There are even more incidents the police don’t know about, as cases often go unreported because the victims are embarrassed at being duped.

Cst. De Jong referred us to this page on the RCMP website that has more information and a short video about this specific type of fraud. It notes that the caller can often assume the identity of a real relative as names and family ties are commonly posted on social media or on geneology websites. It urges people who receive suspicious calls to immediately seek help from a relative or trusted friend, and, of course, to call the police. There are other good tips and I urge you to read – and share – them.

In Mr. and Mrs. M’s case, they were shaken and their loved ones were upset. But they were fortunate to have been set straight in the nick of time by the alert employees at  the Western Union counter. I hate to think about the vast number of other seniors whose love and goodwill cost them a big chunk of their savings. Take the time to mention this story to your older friends and loved ones – you could be saving them thousands of dollars, and a whole lot of heartache for everyone.

Would you like to share this story with a senior who is not on the web? You can download a PDF copy for printing right here. Please distribute widely!