LynnValleyLife  likes to profile notable neighbours who play interesting roles in our community. If you’d like to know more about someone who makes a contribution in our neighbourhood, in large ways or small, drop us a line at [email protected].

He tells us he’s outspoken and doesn’t beat around the bush. And with that understatement, Nat Bosa launches into a wide-ranging, hour-long interview that’s peppered with colourful anecdotes, salty language, and bold visions for the future. 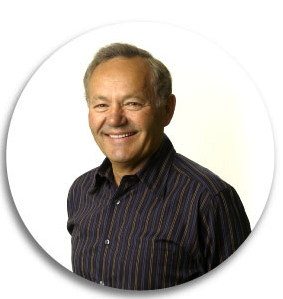 Natale (“Nat”) Bosa is the owner of Bosa Development Corporation, which in turn owns Lynn Valley Centre. The company didn’t build the mall – it was purchased some years ago  – but Nat Bosa is looking to rebuild it, in line with North Van District’s Official Community Plan.

Some might think it’s a small-potatoes project for a man whose decades-old company is busy building internationally. But while he acknowledges that his focus now is south of the border, where he’s had a major hand in developing areas of San Diego, San Francisco, and Seattle, he says “I don’t want to overlook [Lynn Valley]…. This is home. It sure would be great to be able to drive by and say ‘I’m glad I did this.’”

Pointing to the widespread popularity of his mixed-use Newport Village development in Port Moody, Nat says that on a slightly smaller scale “we can do that in Lynn Valley. We can be proud. You think I’m doing this for myself? Listen, I’m not a young puppy anymore. I don’t need to do this… we can lease that box that’s there for something, and we’re fine.” 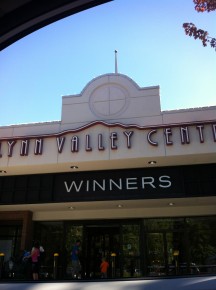 But Nat believes Lynn Valley mall is ripe for change. “Change is good,” he insists. “Let’s put it this way, that area is ready. Let’s change the damn suit. You’ve had the same suit on for 40 years.”

Change, of course, comes easier for some people than for others. But everything about Nat Bosa – his seven bikes, his carefully chosen cars, even his kayaks – indicates that he’s all about forward motion. Even when he was in his teens and 20s, swinging a hammer and framing houses with his brothers, he was known for being fast – “really fast, I can tell you.” Now, with dozens of successful, city-changing developments under his belt, he is known as somewhat of a visionary – a man who can look at bare land, or a run-down area, and see its potential before anyone else can.

Nat is the force behind the look and feel of downtown San Diego, parts of which he started developing in 1998. Is shaping a neighbourhood’s future a big responsibility, we asked him? “Yes,” he replied emphatically, “Big time.” He repeats himself: “Big time. Big time. I have all the finest sites in San Diego. I have them all…. I have a huge responsibility. I want to give them the finest buildings on the West Coast.”

His involvement doesn’t stop at the residential and commercial opportunities he brings to a community. Part of his San Diego commitments included the donation of an art gallery, and, near to his heart, the building of the Nat and Flora Bosa campus of the Monarch School, a place of learning for homeless children that’s the first of its kind in the United States.

Recent examples of his local largesse include a Bosa condominium prize in the current B.C. Children’s Hospital lottery, and funding that made possible the new Bosa Centre for Film and Animation at Capilano University.

“It’s a lot more fun to do that than to make the money,” he says. “I enjoy what I’m doing, but that stuff is really good. Our plan is to give away most of our money…. We want to do a lot of that, my wife and I. That’s what gets us up in the morning. Our kids don’t need us anymore, per se. They’re not kids any more, for starters.”

“The kids” are Jim, Ryan, Jason and Natalie. Jim and Ryan have followed in their father’s footsteps and have their own development companies. Jason is his youngest son, and works with his mother, Flora, who owns the Palladio jewellery store.

Throughout the interview, Nat keeps giving a tip of the hat to the patience displayed by Flora throughout their marriage. Both teenage immigrants from Italy, they met in Vancouver and wed when they were 23 and 19 years old respectively. 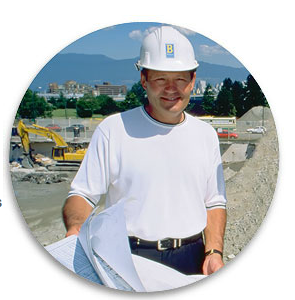 How would Flora describe him, we asked? Nat laughed. “ADD plus.” After a pause, he elaborates: “I would say this: I’m a different cat… I’m definitely not the easiest cat to live with. I’m quite strongminded.” He pauses, and gives us another animal analogy. “Let’s just put it this way, I’m not a little poodle on a leash…. I have to give a lot of credit to Flora, to really put up with it.”

His wife tells him that he’s ugly when he’s mad.  “She’s probably correct,” he concedes. But he’s fair, he emphasizes. And what really makes him mad is people who don’t play by the rules.

He relates a story about a long-ago purchase in West Vancouver, a small lot that was already zoned for redevelopment. It didn’t require a public hearing, but the mayor at the time decided to call for one anyway – and got an earful from Nat the next day. “When you see things like this, you gotta stand up,” he tells LynnValleyLife. If a smaller company than his had been faced with such a turn-about, he points out, it could have lost its shirt. “It could destroy people. And I don’t like that.”

He doesn’t ask for or expect concessions from politicians. “I don’t want no favours,” he emphasizes in a strong voice that still bears traces of an Italian accent. “You must understand – every city says one thing: I’m incredibly fair. I just want to be treated equal to everybody else. I don’t want preferential treatment. I don’t need it.”

He just wants to be told the rules, he says, and then he’ll play well within them. That goes for his personal life, too – when building a fence around his West Vancouver backyard, his strict instructions to the contractor were to build it one inch inside the property line.

So Nat was – to put it mildly – frustrated when Bosa’s redevelopment proposals for Lynn Valley Centre were stalled last year. He describes a long history with North Vancouver District that started years ago with an invitation from then-mayor Don Bell to work together on a joint development that would encompass the new library building.  Bosa financed the architectural planning, but Nat says the plug got pulled when Bell left district council to run for federal office.

His development company didn’t get involved again until after the district passed the Official Community Plan, which stipulated heights and densities.  “Now, as long as you come in underneath that, or not exceed that, you think you’re safe,” said Nat. “That’s the way it works. Every jurisdiction in which I work, that’s the way it works. So we go in. We meet with staff, staff was great, the whole works… so we start going.” 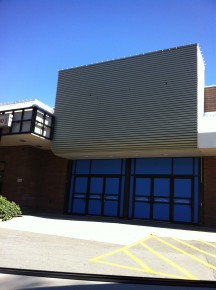 The Zellers store in the mall had been purchased by Target, but as North Van District wouldn’t permit the second storey that Target required, Bosa Development knew that option was a non-starter.

“So we bought out Zellers’ lease a year early,” Nat says. “We knew they were going to leave, so we said ‘Let’s get a head start here.’ So that’s what happened. And then all of a sudden the brakes go on.” Controversy among residents had started, and the District decided to once again re-open the Official Community Plan implementation to public feedback.

“I approached Mark [Sager] after I was pretty much exhausted by what was going on in Lynn Valley,” Nat says. He asked Mark to bring his consultative style to garnering feedback that would help a new architect develop plans more in keeping with what the neighbourhood said it wanted.

He says he hired Mark to run with the ball, and Mark – a lawyer and former mayor known for his listening skills –  hasn’t tossed it back to him yet. But what Nat does know about the new plans, he likes. “This here is gentle,” he says, pointing to sketches of the new Lynn Valley Centre concept. “It gives this incredible, real warm feel. It makes you feel good to go there.” He believes that the two, 12-storey buildings that are part of the revamped proposal can exist practically unnoticed by local residents, similar to the manner in which the 16-storey Kiwanis Tower blends into the landscape. 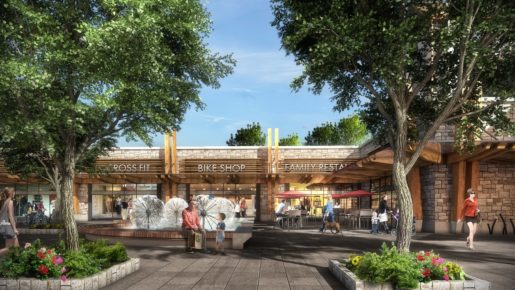 We wondered what someone who so obviously embraces change might, if given the chance, change about himself. “My wife would change all of me,” Nat laughs, but then reflects: “We all have faults. We are all very good at seeing other people’s faults, but we can’t really see our own. “ That said, with whatever faults he may have, he’s had “a hell of a life…. I’ve had a great ride. Everywhere I’ve built, it’s been accepted. Never screwed anybody.”

That’s one piece of wisdom he’s tried to pass on: “I always tell my kids one thing: never step on someone’s toes to advance yourself. Because that’s not how it’s done.”

And if anyone is in any doubt about their faults, Nat suggests they might want to pick up a putter. He advises everyone to play a little golf;  he himself tends to follow each great round with a terrible one. “It’s a humbling game…. When you get upset about a putt that you just missed, you’re getting upset at you – you’re the jerk that missed it! You’re not blaming anybody else, that’s what’s good about it.”

If you wonder how the head of a company with several international developments on the go has time for golf, Nat is quick to credit his team. “I hire the finest people, I pay them well, and I expect the best of them,” he says. He likens himself to an orchestra conductor. “I don’t have many musicians, but we make great music.”

Knowing that his projects are in good hands allows him to avoid the workaholic lifestyle. “If I don’t go by the jobsite,” he notes, “that means they’re doing the right thing.”

He admits, though, that his mind is always active with work-related thoughts. We asked if he could picture an alternate reality for himself, one that didn’t see him entering the construction trade as a young immigrant. The thought, Nat says, has never entered his mind. “[Construction’s] my game. I think I’m pretty good at it and that’s what I like.” He thinks for a moment. “For me to re-invent myself….I think I’d probably be miserable at it. Of course, we adapt… but mind you, [at my age?] I’m at the bottom of the sixth inning.”

He may be turning 69 years old this Christmas Day, but the strength of his parting handshake could make lesser men weep. Our interview time is up, and Nat is out the door into the August sunshine, off to see what the gods of golf have in store for him today.

Mark Sager is inviting Lynn Valley residents to an unveiling of the above-mentioned designs for the proposed Lynn Valley shopping centre redevelopment on Thursday, September 12 at 7 p.m., in the old Zellers premises (access via exterior doors facing Safeway). If you are unable to attend that evening, please contact LynnValleyLife, which is arranging a sneak preview for its LVL Network members. Be sure to drop us a line at [email protected] if you’d like to come!