Ready for the summer forest fire season, 35 special recruits recently wrapped their initial wildfire training to form the District of North Vancouver Fire and Rescue Service’s new extended operations unit. Along with forest planning, public awareness and inter-agency support, Lynn Valley’s wildland-urban interface is better positioned than ever before to deal with wildfires.

“We formed a partnership with our engineering, utilities and parks departments. These are district employees who usually may be working in our parks, driving heavy equipment, repairing roads,” said DNV Fire Chief Brian Hutchinson. “They all volunteered and stepped up for two days of special training to form our extended operations unit.”

The initial concept came from district preparations and planning for a major wildland fire event, he said. 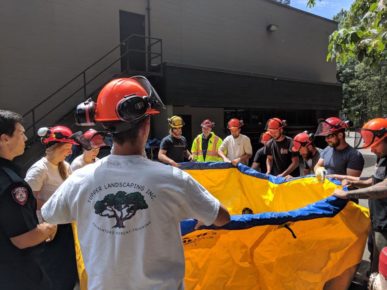 “We will be using them for any extended operation should we need them – flooding, landslide, significant seismic event – any where we are going to need individuals to enhance our response footprint,” said Hutchinson. “We have the ability to put them in uniform, we’ll be incorporating them into our incident command.”

Functionally this could extend the 125-uniformed-firefighter force by almost 30 per cent.

“It’s a force multiplier,” said Hutchinson. “They have done their wildland firefighting program and we will be giving them additional training. We are outfitting them with the appropriate attire to be deployed and we are setting aside a cache of equipment.

“If I have four firefighters on scene and a dozen of our extended operations personnel, I can break them into two groups of six with two of our firefighters and we have two teams under the direction of seasoned fighters,” he said.

The new unit is building on a past program that Hutchinson said will make better use of the volunteers and the district’s resources. When the call to district staff went out, there was an initial sign up group. Since they began their training the program has gained some momentum.

“After the first session those individuals went back to their workplaces and spoke about the program, the training and what was to come and I have heard that we have more individuals interested but we are capping the unit at 35 for this initial year,” said Hutchinson.

The district has invested in extensive planning creating the Community Wildfire Protection Plan a number of years ago. It combines forest management, inter-agency support and resources for local firefighters to create a full prevention and response plan.

“Everyone is well aware of the impacts – we have seen that in other jurisdictions when a wildfire has moved into an urban area,” Hutchinson said. “I think the DNV is the leading municipality in British Columbia in terms of our mitigation efforts, fuel thinning.

“Our foresters are out there managing the forests in that interface. We have to be the lead agency in B.C. when it comes to wildland-urban interface because we have the hazards but we have the people and equipment to mitigate that.”

A major forest management push began last year and continues in local parks and along Lynn Valley trails. Foresters are actively thinning vegetation and planting native species. You may have already seen some of the work completed or in the works along Kirskstone Park, Dempsey Road, the top of Mountain Highway and the green belt between Hoskins and Underwood.

“What you will notice is the forest will look cleaner,” siad Hutchinson. “A lot of what we call ladder fuel will be removed – the brush, the scrub, the small trees that build up on the forest floor – those are what take a fire up from the forest floor into the canopy of the trees.” 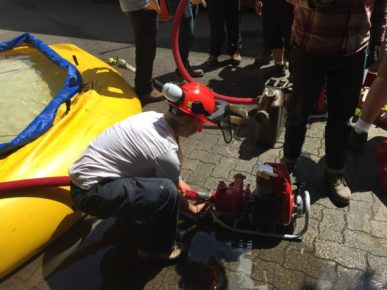 It’s a process that mimics the natural fire cycle, and ultimately the goal is to create a healthy, more naturally fire-resistant, forest that is better for wildlife, he said.

Just as much intention has been put planning an incident response. In the case of a large-scale fire there is plenty of support at the disposal of the DNV Fire Rescue Service.

“The DNV Fire Rescue is not a solo agency on the north shore,” said Hutchinson. “We work hand-in-hand with West Vancouver and North Vancouver City Fire Departments. And we also work extremely closely with B.C. Forest Wildfire Services and Metro Vancouver. We also reach into North Shore Emergency Management and North Shore Rescue. The other agency support is phenomenal.”

There are provincial wildfire bases in Squamish and Hope that would respond to our area. As well the DNV has its own resources like the Wildland Urban interface Initial Attack Vehicle based in Deep Cove.

“We also have a structure protection unit – a sprinkler system that can protect 30 homes,” said Hutchinson. “We have the pieces in place – in terms of our training and equipment that position us very well. Helicopter support with Talon, who are familiar with our mountains from their work with Metro Vancouver and North Shore Rescue.”

What You Can Do 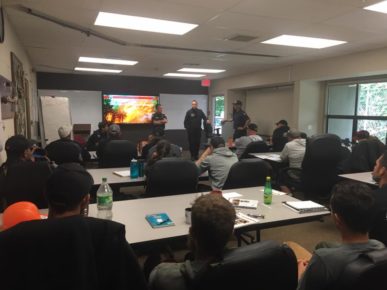 With so many resources, a more temperate climate and a nearby population watching our mountains, Hutchinson feels a devastating event like the Okanagan Mountain fire is unlikely.

“The public is extremely vigilant – we get reports of anything and everything remotely related to fire, with our fuel thinning project and with the training and equipment in place, one can never say ‘never’ but I think we are very well positioned.”

Homeowners close to our forests can also help mitigate the fire risk to their property.

“One of the lessons learned from catastrophic fires is the importance of cleanliness,” he said. “Keeping

one’s property tidy. Trees are trimmed, debris is cleaned up, wood is stored away. The homes that have space around them do better. That doesn’t mean chopping down every tree – but the ones you do have are trimmed and maintained and cared for – that is the best thing people can do. We live on the north shore because we want the trees near us and we need to use the best practices to deal with that.”

“That is the beautiful thing about the north shore that we have these trails,” said Hutchinson. “Be careful with smoking materials – make sure they are extinguished and respect bans when they are put in place. But more importantly – heightened awareness – if people have concerns or see something that isn’t quite right to make that call and notify 911 and it will give us a chance to access the situation. The sooner we can action something we can mitigate it and make sure it doesn’t become more significant.