FROM LYNN O’MALLEY: It has become abundantly apparent that you can’t count on June for good weather. But the end of the month does bring one thing you can depend on: grad ceremonies, photo opps and – unfortunately – the worry that some kids will take things too far and ‘celebrate’ with an open bottle in hand.

So this month’s launch of Canada’s Temperance Foundation (CTF) is timely. Started by a Victoria man and V-P’d by his addiction-experienced friend, it advocates “abstinence or retraint” in the use of alcohol and drugs. It invites Canadians to take a pledge in support of the cause.

“In ancient Greece,” reads the CTF website, “temperance was considered a virtue and was obtained when one became enlightened through harmonious living.”

Fair enough – who can argue with harmonious living? But in the interests of fair play, I do want to point out that the fine awareness-raising work of the CTF is building on the earlier labours of Nora Newman, Anna Flodin, James Simmonds and other Lynn Valley schoolchildren who competed in the annual essay competitions sponsored by the local Women’s Temperance Union in the early 1900s.

In 1928, young James won a $5 gold coin for the following second-place essay. (Each year the winner received the David Spencer Cup, which was often displayed at Lynn Valley School.)

We bring you this excerpt of James’s 84-year-old essay, along with our heartfelt wishes for a safe and happy grad week throughout the valley. We can’t speak to the veracity of his scientific claims, but we do hope today’s kids pay attention when he says that by drinking, you are “lowering the grade of your mind… (and) dulling your higher sense.”

Alcohol has great effects on health and length of life. If a man drinks he is sick more, and dies sooner than a sober man. 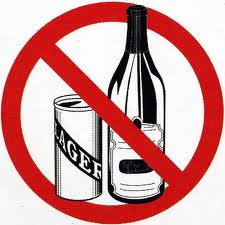 When the muscles of the heart change to fat, they lose their strength. The kidneys and nerve fibres are also affected in this way.

Fibroid degeneration affects the heart, liver, kidneys, arteries and brain. The arteries are affected by the lime that is deposited on the walls. This makes them very brittle and narrow, so the blood can hardly make its way through.

Alcohol affects the brain. It causes paralysis and insanity. A man who takes three ounces of alcohol each day for twelve days could add figures only three-fifths as fast as when he takes no alcohol. This effect lasts for at least forty-eight hours.

A drunkard is not the only person who suffers from the result of his habit. Drink is responsible for a large number of crimes. The worst feature of the poverty caused by alcohol is not the fact that the drunkard himself suffers, but the fact that the innocent person suffers far more than he does. Many companies and railways will not employ anyone who drinks. During the Great War most of the principal nations of the world forbade the manufacture of alcoholic drinks.

Six main things you do if you take alcohol are: that you are threatening the physical structure of your stomach, your liver, your kidneys, your heart, your blood vessels, your nerves and your brain; that you are unquestionably lessening your power to work in any field, be it physical, intellectual or artistic; that you are in some measure lowering the grade of your mind, dulling your higher sense and taking the edge off your morals; that you are distinctly lessening your chances of maintaining your health and living to a good old age; that you are adding yourself to the number of those whose habits cause more suffering and misery, disease and death, than do all other causes combined; that you are fastening on yourself a habit that will lead many business men to refuse to employ you.

Alcohol is a poison, a deceiver and a wrecker of man and homes.”