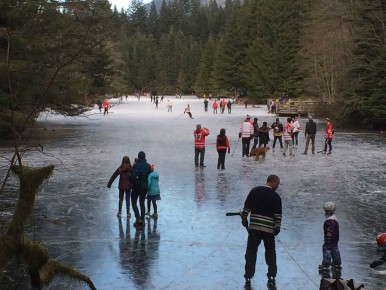 Even those of us who have lived in Lynn Valley most of our lives don’t have many “back in the good ol’ days” stories about skating on local waterholes. The small ‘swamp’ off of McNair Drive in Mountain View Park would very occasionally freeze over enough to provide a destination for a few skaters, but there wasn’t room for many, and ‘skating’ was probably an over-generous verb to use to describe the experience of shakily navigating between the branches and logs frozen into the muddy ice.

Rice Lake in those years was still an off-limits watershed, accessible only to those brave/foolish/hardy enough to cross the river via the pipeline you can see to the north of the current pedestrian bridge. 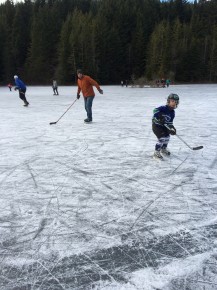 The biggest obstacle, of course, has always been our temperate coastal weather. It’s not often we have a sustained freeze that leads to the formation of natural ice rinks. So it’s all the more thrilling when it does happen, and people off all ages were out enjoying a beautiful day on Rice Lake rink today. Hundreds of skaters, hockey players, sliders and walkers spread out to play informal games or watch ones in progress. Walking on the lake, under the open sky, was certainly a novel experience, and allowed one to explore the geography of the lake from a whole new vantage point. Best of all, though, it was great to see so many people out with smiles on their faces, enjoying this uncommon recreational opportunity! 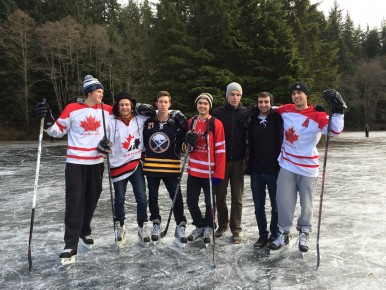 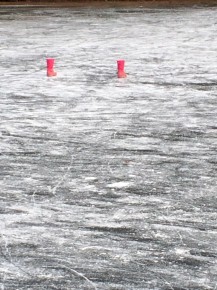 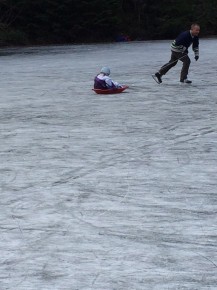 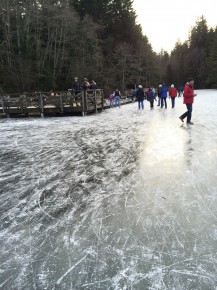 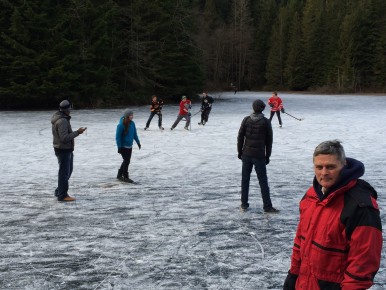