The Seymour Salmonid Society is marking a “mile-stone” of sorts July 10th. The organization is inviting the public and other guests to join them in society’s Rockslide Opening Ceremony.

“We are hoping this is our last summer of the rockslide mitigation project,” said Reese Fowler, volunteer coordinator for the Seymour Salmonid Society.

The society is leading a walk July 10th at 1 p.m. from the north end of Riverside Drive to the presentation site for 1:30 p.m. at  Fisherman’s Trail. There will be presentations from partners like the Squamish and Tsleil-Waututh First Nations, government representatives and other stakeholders.

“Part of the reason the ceremony is where it is, is because it overlooks the actual site,” said Fowler. “Anyone coming up can see the scar on the side of the canyon and the boulders in the river. Some of these rocks are huge – one of them is called a house rock because it is a big as a house. Others used to be the size of a car and our aim is to blast them down to the size of a microwave.”

An early morning in December 2014 saw nature dramatically change the Seymour River. The normal freeze-thaw cycle created a dramatic rock fall. About 80,000 cubic metres of rock entered the river with about 30,000 washing away and leaving 50,000 cubic metres in the river. 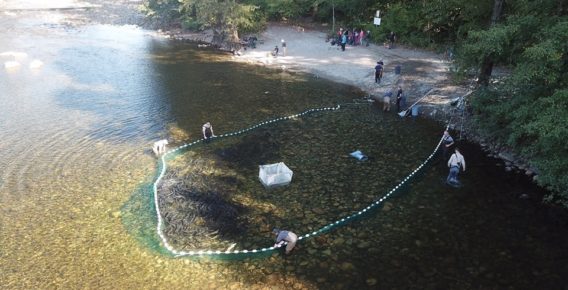 “A rockslide broke off the canyon walls and completely blocked the river channel,” said Fowler. “It created a lake upstream of the river. The big thing is it prevented returning salmon and steelhead from being able to move up the watershed to be able spawn.”

This lead to some creative planning and a multi-year project to re-open the channel and improve young salmon habitat.

“The Society has been managing a project of rock drilling and rock blasting so we can get salmon into the upper watershed again. This is the third year and hopefully the last,” said Fowler. “In the last three years we have also been doing a Trap and Truck program in the lower river. When the salmon arrive in to the river they are captured in nets and taken to trucks and physically moved upstream of the rockslide and released. It’s a lot of manual labour and volunteer assistance to get that to happen. Some fish are taken to the hatchery as well as for breed stock to support the number of salmon that are able to spawn naturally in the river.”

The ongoing project has seen a number of highs and lows.

“Last year was a very poor salmon run,” said Fowler. “We managed to only move 140 fish to the upper river, but in 2017 we were able to get close to 2000. We are hoping this is the last year with trap and truck and that next year the fish will be able to move up naturally. The hope is that we will have spawning salmon in the river in the years to come.” 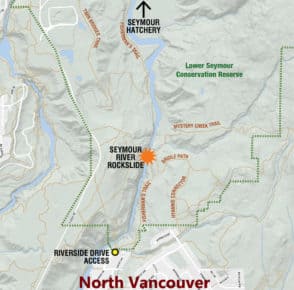 The opening of the Seymour River is one part of a larger plan to improve the habitat for salmon.

“We have drilling contractors there during the week drilling holes and at the end of the week they fill up the holes with explosives and they set off the charge,” said Fowler. “They repeat to create a smoother path. For the salmon it’s about gradient, it can’t be too steep or have too big a jump. We are trying to smooth it to about a 7 per cent gradient.

“During the summer we do rock breaking but the rocks are in still in the channel. In the fall when the heavy rains come we let the river do it’s natural cleaning process and move those rocks along. We hope there will be some decent rain and it will flush the remaining rocks out and clear a path that will enable the salmon to through.” 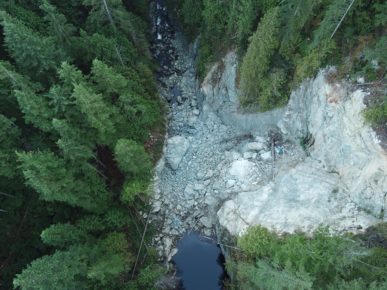 Besides the paid professionals dealing with the slide, there is also a roster of 950 volunteers that support the Seymour Salmonid Society throughout the year. The rockslide project has a budget of about $1.2 million – all from donations and government support.

“It’s a lot money but its a drop in the bucket for the wider ecosystem restoration we are trying to do,” said Fowler. “Creating passage is one thing but you then have to create the habitat to spawn in as well. It’s about creating off-channel habitats – river gravels and ponded areas so the young salmon and steelhead can live. They live in fresh water for a year before they move out of the system into the ocean. We create the habitat for the young fish to grow to a decent size and survive the two to three years they need to before returning.”

The Society is working on 40,000 square metres of habitat compensation in the 15 km river between the mouth and the Seymour dam.

“It’s an interesting dynamic here in that the Seymour River is quite a steep sided valley so there aren’t a lot of the flat areas next to the channel to find those spots and create that habitat,” said Fowler. “It’s a challenge but most of the spots we have found can be used to increase that habitat area.”

To learn more about the Seymour Salmonid Society visit its website. For more information on the July 10th Rockslide Opening Ceremony visit their Facebook page.