A local artist experienced in healing is leading the Lynn Valley Love sewing project. Quilter, artist, and instructor Berene Campbell is hoping the works will help reclaim the Lynn Valley Library and Village after the March 27th attack. 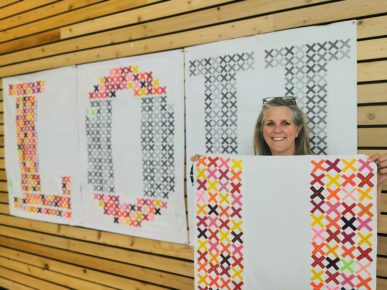 As an artist and creator Campbell has felt a need to respond when communities she cares about are struck by tragedy. She uses her work to foster social justice and healing.

“There is a call – even from far away – when you see your fellow human beings suffering to do something about it,” she said.

After the 2013 Boston Marathon bombing Campbell was inspired to found the community project To Boston With Love. She and others voiced a call for handmade flags supporting the community, the injured and to recognize those that were killed. The project debuted during the month of April 2014 at the Boston Museum of Fine Art to mark one year after the bombing.

Her initiatives for collective healing continued in Toronto where she was living at the time of its April 2018 van attack. She received over 2000 peace and love flags from across the world that were pieced together to form banners. The project, once completed, was placed in the North York City Centre where it filled a vast space with colour and positive messages.

“The overall idea is to turn this community hub into a space filled with beauty, comfort and love – like a big visual hug,” she said at the time.

From loss to love

Campbell’s motivation remains much the same after the March 27 stabbing that killed one, injured six, and left the community as a whole reeling. Compassionate, the past projects have been deeply meaningful to Campbell, but with this tragedy taking place in her home community, this one is special. 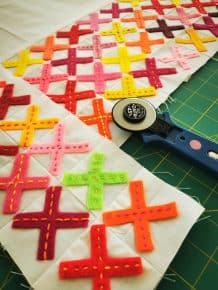 “My son and his girlfriend were here at the exact time – just one week prior,” she said. “For so many of us, it was just timing that kept us away that day.”

In May of this year, she partnered with the NVDPL and the District of North Vancouver to begin the Lynn Valley Love sewing project. It is a two-part project set to be unveiled this month at the Lynn Valley branch. Earlier in the spring, the public was invited to pick up simple sewing kits to help stitch the community back together. The felt and cotton pieces were simply sewed at home by residents and dropped off for Campbell and her team to stitch together. The X’s of love have been received from other parts of the world as well as crafters saw the project launch online.

For some it was an act to send love, for others participation is an act of their own healing and to reduce stress and anxiety.

“It’s very repetitive. There is something zen about doing the stitching,” she said.

The second part of the project involves more elaborated quilted banners that will hang in the stairwell of the library. Campbell and her team have a vast network of quilters willing to contribute to the ‘visual hug.’ Banners have arrived from near and far.

Campbell’s community action goes beyond public displays. She has also established the Handmade Collective Awards, a bursary (financial aid) fund for BIPOC, Indigenous and 2SLGBTQ+ students at Ryerson University in Toronto. Her website also has a number of tutorials and projects for sewers.