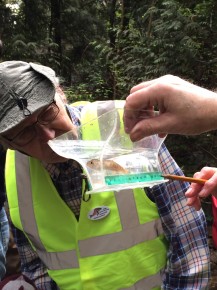 While many Lynn Valley residents may have been coming home to a welcome dinner or stretching out in front of the TV Friday night, a handful of enthusiastic citizens were on the banks of Hastings Creek carefully placing a number of bucket-shaped, black mesh traps. And the next morning, they donned their gum boots again to see what had transpired while they slept.

They were volunteers from the North Shore Streamkeepers, surveying the numbers of year-old smolt in the creek to survey whether the fish population was healthy. What they found swimming in the traps put smiles on everyone’s faces.

As the fish were carefully released out of the traps and into a bucket for measuring and counting, Jan Lander tallied the numbers. The result? The best smolt trapping since 2006, with 27 coho smolts being counted, a large increase over the five or so that have been typical in the past few years. These are a sampling of the fish that were born in the Hunter Park area of Hastings Creek last year and have survived since then. Four crayfish and 12 cutthroat trout – many measuring 16 or 17 cm – were also amongst the fish counted and released. 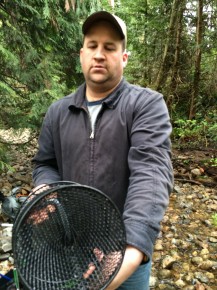 The relationship between human society and waterways has not always been a respectful one. In  earlier decades, the enthusiastic growth of industry, building booms and road construction commonly resulted in polluted streams, blocked spawning routes, and diminished fish populations. Even home gardeners had a negative impact, by introducing invasive plant species such as ivy, lamium, and periwinkle to stream-side environments.

Thanks, however, to greater awareness, tighter bylaws, and good working partnerships the health of urban streams has improved in many areas. Leading the charge in Lynn Valley have been an active group of North Shore Streamkeepers who safeguard and enhance the ability of local creeks to support healthy fish stocks.

People of all ages converge on the streams throughout the year to tackle a variety of tasks, from culling invasive plants, installing and maintaining fish ladders, testing water quality,  restoring habitat and performing surveys. One volunteer even takes it upon himself to find out about new construction projects taking place near creeks; he then visits each site to ensure waterway protection rules are being followed and that filters have been placed in the storm drains. He returns to the site again once construction is complete to ensure the filters have been appropriately removed.

The North Shore Streamkeepers were established in 1993, and is a member of the Pacific Streamkeepers Federation. The Streamkeepers are a program of the Department of Fisheries and Oceans, which provides a multi-module training manual for those volunteers who wish to learn everything from performing a habitat survey to sampling water quality to trapping and identifying fish.

The Streamkeepers’ work has been recognized in a number of ways – Morten Creek was named for longtime volunteer Zo Ann Morten, and Mayor Richard Walton will be at Hunter Park at Donovan’s Pond on Saturday, April 25 at 11 a.m. to dedicate a new fish ladder installed by North Vancouver District in response to lobbying from the Streamkeepers.

What they’d really like, however, is for more volunteers to swell their ranks and learn for themselves the satisfaction of keeping our waterways healthy. To learn more, visit the North Shore Streamkeepers website or email [email protected]. 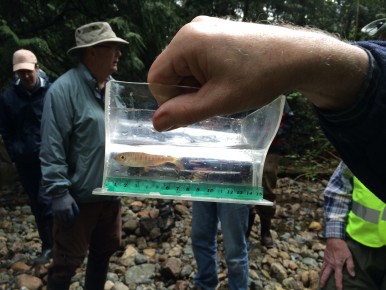