The noise of childhood

It is often said new moms should embrace the mess or chaos of motherhood, for two local moms the pandemic has been all about embracing the noise. Lynsey MacDonald and Caroline Garstin are reveling in being “boy moms” and launched a clothing line that embraces their lifestyle. 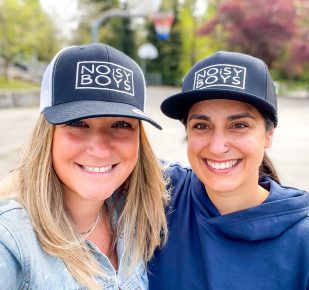 When Garstin and MacDonald – and their four boys under four – walk up to a playground, they say, you will know they are coming.

“At the playground we’d see little girls playing cooperatively, having a tea party and then we show up with the boys having a yelling match,” laughs MacDonald. “We cause a scene.”

The two Lynn Valley moms were friends back in high school at Argyle but lost touch. They reconnected a few years ago, in of all places, the maternity ward at Lions Gate Hospital. Another pair of babies later and they are loving the rough and tumble life they have – each with a 3.5-year-old and baby under one.

“We were bored during the early pandemic and started taking more pictures and set up an Instagram page because we thought so many moms could relate to our lives. We celebrate the real. There are so many picture-perfect images on Instagram and we wanted to show the real-life of raising four boys between us,” said MacDonald.

“Everyone has a noisy boy in their life whether it’s a teenager, a dad, a brother, a son and we took that idea and it grew,” said Gastin. “So now people can hear us coming and see us coming.”

Once the pair took hold of the idea, they credit their families and moms supporting moms for getting them to where they are now. Garstin and MacDonald are also grateful to the hive-mind of local Facebook groups for giving them momentum to get started. This is their first entrepreneurial venture. 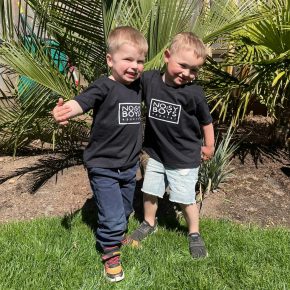 “It’s a huge learning curve,” said Garstin. “It has been a lot of fun to use our creative brains while on maternity leave. I am a full-time stay-at-home mom and Lynsey is going back to teaching this fall. This is different than anything we have done before.”

“It has been nice to think about something other than snacks and nap times,” added MacDonald. “My husband owns a business and Lynsey’s dad owns a North Shore business – so we feel supported.”

They have launched a line of hats, tees, and sweatshirts – with more pieces in the works for summer. With sales growing they are excited about the future.

“We are surrounded by a lot of boy moms, I feel like we were destined to be boy moms – it’s a whole other thing,” said MacDonald. “I love the chaos and there is a lot of humour in it,” added Garstin.

Noisy Boys is giving back to the community too. By using the promo code: NOISY10 you can get 10 percent off a crewneck sweatshirt and Noisy Boys will donate 10 percent to the Cause We Care Foundation which empowers single mothers and children living in poverty.