The North Vancouver Community Arts Council is combining art and technology in an innovative project and you can support it. Twelve artists have been selected for the calendar and have their works on display at the North Vancouver District Public Library at the Lynn Valley main branch until September 30.  Proceeds from the calendar support its cultural mapping project.

The arts council has been working on a project since 2015 to create the definitive resource for arts and culture on the North Shore.

“The North Shore Cultural Mapping Project is creating a GIS [geographic information system] online platform that will highlight all the cultural assets across the North Shore,” explained Nancy Cottingham Powell, executive director of the North Vancouver Community Arts Council. “What we are trying to do is make things more visible. There is a lot out there and we wanted a place where if you are interested in a arts and culture on the North Shore – go here.”

The project’s goal is to become the central hub for arts and cultural information, uniting the two First Nations and three municipalities on this side of the water, she said. It will organize cultural assets within 10 categories that can then be interacted with. Adding layers of information on the map like census data to create a fuller picture of what is available on the North Shore.

“We are gathering assets through a survey based system – so it is permission based – people will know they are on it,” said Cottingham Powell. “With each asset we are able to have a picture, we are able to tell their story, we are to give some stats and we are able to link to their website.”

The project aims to be a resource for everyone from tourists to urban planners to local students.

“I think we are going to help residents learn about the whole North Shore,” said Cottingham Powell. “I think people tend to know about their own neighbourhood – if you live in Lynn Valley you don’t nessecasiryl know what’s happening on the West Van waterfront or Deep Cove. It’s going to be a powerful marketing tool.”

While the arts councils are caretakers of the project, Cottingham Powell recognizes to be successful it has to extend beyond her organization’s mandate.

“It’s not just about us – it’s about the community,” she said. “When we say culture it is a broad term. Take North Van Rec, they run a lot of cultural programing at their facilities.”

Everything from creative industries to heritage and public art to heritage will be included. She is particularly interested in two categories.

A beta version of the map is in a testing phase until Sept. 1st. Visit  northshoreculturemap.net for a basic, unbranded version to test out the functionality. The council is also welcoming feedback at this time with the official resource launch scheduled for March 2020.

Since 2016 the arts council has be creating annual calendars to help fundraise for the cultural mapping project, building on a previous calendar created by Capilano University. 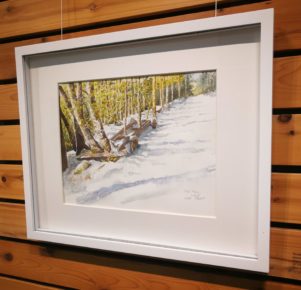 “When my predecessor Linda File started the cultural mapping project she realized people liked that calendar and we need a fundraiser, so she and Michelle Richard produced the first in 2016,” said Cottingham Powell.

Twelve artists have been selected for the calendar and have their works on display at the North Vancouver District Public Library at the Lynn Valley main branch until September 30.

“We are representing that North Shore feel, so we aim for four places represented by the three municipalities.”

Calendars will be available at local stores and at the CityScape Community Art Space on on Lonsdale.

“Everything is about stories – that is what we are trying to do – share the North Shore through the lense of artists.”