From Lynn O’Malley, Voice of the Valley

She may have accomplished many things in her life since, but chief among Jane Jessop’s memories is being crowned May Queen at the 1962 Lynn Valley Day. And it wasn’t just any Lynn Valley Day – they really put on the Ritz as it was the 50th anniversary of the first Lynn Valley Day that took place in 1912 in Lynn Canyon Park.

It wasn’t Jane’s first Lynn Valley Day, though. Then Jane Hambleton, she had been one of the May Queen’s flower girls when she was just in Grade 1. But that was nothing compared to being chosen by popular vote from amongst four or five other Lynn Valley Elementary School girls to be the May Queen in Grade 6.

In her purple velvet robe and white dress (which still hangs in her closet), Jane says “I remember really feeling like the queen of Lynn Valley…. I felt like I had done right.” It would be hard to feel anything but regal, being surrounded by little flower girls with baskets of petals and beefeater boys protecting her with swords.

Jane made a speech upon ascending the stage, which had been designed by her artist father Jack Hambleton, after which she remembers being able to relax. But not too much… because part of being the May Queen was representing Lynn Valley at other events such as the North Vancouver parade, during which she rode in the back of an Austin Healey. “You kind of had to keep tidy and represent yourself well throughout the year,” Jane recalls, then take part in the next year’s Lynn Valley Day ceremonies by crowning the incoming May Queen – who, in 1963, was 11-year-old Linda Anderson.

Other Lynn Valley Day traditions, still remembered by many locals, included girls and boys performing the maypole dances under the eagle eye of local ballet teacher Miss Dorothy Hunter, who was responsible in the weeks preceding the event for teaching the dances that result in the ribbons being woven into intricate patterns. 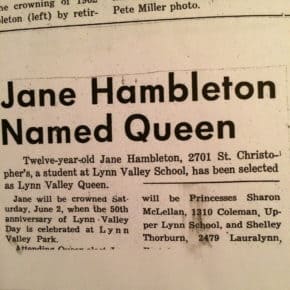 The whole event was “very grand,” Jane says, and commemorated in several local newspaper articles and photos. She still treasures a letter of congratulations sent to her as “the queen elect” by Walter Draycot, a Lynn Valley pioneer and Jane’s back-fence neighbour.  She remembers Mr. Draycot as a “wonderful, eclectic man” who showed her how to cut and clean rhubarb, taught her how to type on an old manual typewriter, and kept a preserved octopus in a jar.

Jane moved to Kelowna at age 14, but has been back living in the North Vancouver area for the past 20 years. With a granddaughter Samantha just about the same age as she was when she was crowned in 1962, this Lynn Valley Day – taking place Saturday, May 30 – is sure to bring back fond memories for all. 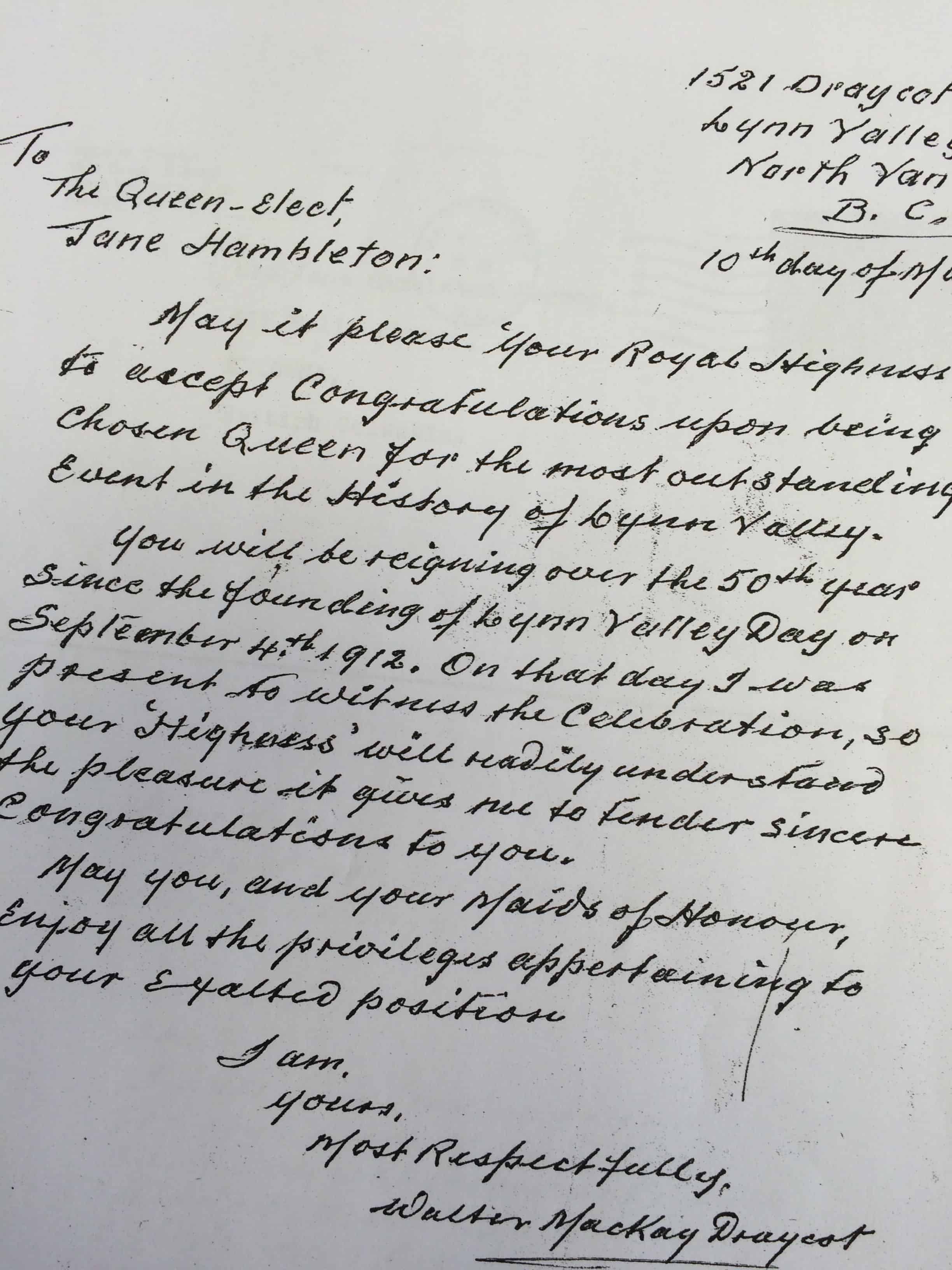