Mom won in a walk: a Lynn Valley Day memory

My mother’s Achilles heel was actually her most valuable asset. At least it was on the afternoon she entered the Lynn Valley Day walking race from 15th Street and Lonsdale Avenue to Lynn Valley Park on June 1, 1957, coming up 58 years ago now.

With this year’s Lynn Valley Day scheduled for Saturday, May 30, this is the perfect opportunity to tell the tale of my mom’s victory using a rather unorthodox finishing kick.

You could say it was all my fault that my mom got involved in the Lynn Valley Day walkathon, so let’s start at the beginning. As a 15 year old back then, I was ready to compete in just about any sport going; and race walking was one I had not tried yet. 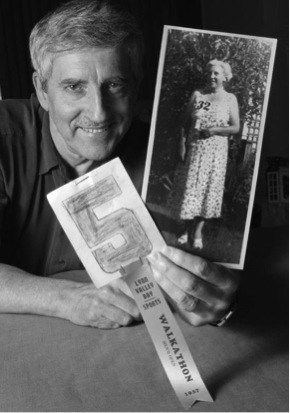 So when it was announced that the 1957 Lynn Valley Day would feature its second annual walking race – with what were then substantial awards of $50 for first place in both the open men’s and women’s races, $30 for second and $20 for third – I decided to enter.

The open races – some five-and-a-half miles in length – began in Edgemont Village.

From there it was east on Queen’s Road, south on Jones Avenue to Mahon Park, east on 15th Street, north on Grand Boulevard, veering onto Lynn Valley Road and up Mountain Highway to the Lynn Valley ballpark.

I practiced my heel-and-toe gait for short distances during the days that led up to the race, preparing as best I could for a sport I knew nothing about.

Then came the big day.

My parents were supportive of me in all of my various activities. So, though my dad was for some reason unable to see the race that day, my mom walked the seven blocks from our home to 15th and Lonsdale to cheer me on at the halfway point of the competition.

At the start line, I was given race-badge number 5 to pin on my shirt and found myself up against about 30 men and women, with both genders competing simultaneously.

Walk organizer Bill Warren and starters Walter Janz of the Lynn Valley Businessmen’s Association and George Pinkess, Past President of the Lynn Valley Community Club, along with official timer Rex Johnson, got us off on our way just a few minutes after one o’clock. Providing an escort was Lynnmour fire hall’s vintage truck which had won an award in the 1956 PNE parade. The RCMP looked after traffic control.

The route was flat at first, before dipping along Queens. Then, still full of energy, we pranced straight down Jones (there was no Upper Levels Highway to prevent this direct route then). After passing the future site of Carson Graham Secondary, we arrived at Mahon Park. With the turn east at 15th, there came a very long, uphill climb that continued pretty much the rest of the way. So I needed a little cheering up to boost my spirits about then.

But when I arrived at 15th and Lonsdale, my mom was nowhere to be seen. Neither, for that matter, were the leaders of the race who by this time had hot-footed it well ahead of me. Actually, they were so far in front that I couldn’t even remember what their heels and backsides looked like.

I do remember Ralph Hall, who wrote sports for The North Shore Review, stationed on the corner of 15th and Moody Avenue taking photos as we approached Boulevard Park. In addition, CBUT sports director Ted Reynolds had a cameraman on the scene capturing footage for the evening news.

And I recall a furious battle to hold off fast-charging, future-Olympian Valerie Jerome, two years my junior, who was being inspired by several supporters who were urging her on as we marched along Grand Boulevard not far from the Jeromes’ home on 17th Street. In the end, 13-year-old Valerie placed second in the women’s race while I finished somewhere in the middle of the pack among the men.

So just where was my mom when I needed her to spur me on with encouragement during the last half of the race?

Well, you see, when she arrived at 15th and Lonsdale to watch the race, she found event officials organizing races from there to Lynn Valley for men 60 and over and women 50 and over.

Mom was certainly not attired for any competition. In fact, she was wearing the dress you see in the picture here and a pair of sandal-like shoes with straps which were secured by buckles at the back of her ankles. However, despite this disadvantage, she took the challenge and entered on the spot, toeing the starting line with five other women and one man, 71-year-old Arnold Webster, who just needed to finish in order to take the senior men’s winnings of $30.

But while I had trained for my race for a couple of days, Mom (then age 53) had trained for years without knowing it by walking up and down Lonsdale while visiting various shops, restaurants and banks. She never did learn to drive.

So, unbeknown to me, Mom was hiking a three-mile trek along 15th, up Grand Boulevard, along Lynn Valley Road and Mountain Highway to the same finish line at the very same time I was headed there.

Brilliant sunshine poured down on the throngs at Lynn Valley Park as the leaders of the senior women’s race rounded the corner onto Mountain Highway and came into view. The final blocks of the race were lined with crowds of people cheering the walkers while awaiting the parade, the Maypole and folk dancing and the crowning of May Queen Marilyn Boyes who would soon appear with her attendants Maureen Lafek and Nikki Ross.

At the head of the race, Mom pounded the pavement side by side with another equally intense and motivated competitor. Together the sun-baked pair strode virtually shoulder to shoulder, each striving to edge in front and open up a little lead as the finish line loomed ahead.

Suddenly and inexplicably, Mom’s opponent gasped and slowed her pace while Mom sped on in a successful, all-out final effort to claim first place and $30 in prize money.

How did Mom do it? The secret to her decisive win in the last few yards lay right there at her feet. As the two front-runners were waging their fierce final sprint, Mom’s opponent looked down and saw blood gushing from Mom’s heels. The buckles on Mom’s sandal straps had been cutting into her Achilles tendons. As the race progressed, the raw flesh began to ooze blood. Mom, concentrating on the race, didn’t notice it.

But her opponent couldn’t take the sight of the blood and, nauseated, was unable to continue at the frantic pace needed to win.

I have walked in the Lynn Valley Day parade a number of times over the years. Each time, I imagine what it was like for her as I trace the steps of her long-ago “blood, sweat and cheers” victory.

Len Corben is a longtime North Shore journalist and author whose passion is local sports and history. His latest book, PLAY IT AGAIN! A Century PLUS of North Shore Sports Stories ($27.95), includes more than 100 mostly quirky tales going back as far as 1897. For more information or to purchase a signed copy, contact him at [email protected].