Every Monday night at the Black Bear we run a trivia game for our guests, with questions running the gamut of general knowledge and obscure facts.  There is no cost to play, and teams are encouraged; best to bring a few people with different interests and knowledge than yourself! The only real rule is that Google cannot be one of your teammates. 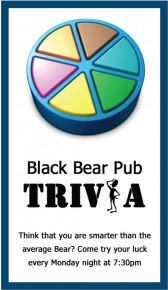 The game starts at 7:30 p.m., and usually runs until around 9:30 p.m. There are two rounds of fifteen questions per round, and the team with the highest score at the end of two rounds claims the victory, and has a choice between a plate of 24 hot wings or a pitcher of Molson Canadian to celebrate their win.

Besides general knowledge and obscure facts, we occasionally choose to run with a certain theme, which is usually based around a certain event; on Canada Day the theme was Canadiana, during the Olympics the questions were all about Olympic events and history, and around the time of the Oscars we did a night of Movie Quotes.

Next week will mark the 20th week of Black Bear Trivia, which means that our guests will have answered 800 questions since we started playing. The questions themselves come from the staff and managers of the Black Bear, rather than simply being pulled down from a website or lifted from Trivial Pursuit. It’s been a lot of research, a lot of fun, and a lot of being impressed by just how much our guests actually know about really, really random things.