North Vancouver District Council is on the hot seat as it ponders a report describing options for the implementation of the Official Community Plan (OCP) in Lynn Valley.

The report was presented at a regular council meeting on September 23, in front of a gallery of citizens representing a wide range of opinions.

The OCP, which was passed in June 2011, projects the addition of up to 5,000 people in Lynn Valley over the next two decades, and opens the door to the development of a range of low to higher-density housing options within the town centre. In September 2012, Bosa Developments accordingly submitted a preliminary application that included a 22-storey tower in its proposed redevelopment of its shopping centre property.

The resulting controversy over building heights, traffic and increased density meant everyone went back to the drawing board – including the District, which launched extended public education and feedback events in mid-2013.

The results of that feedback are now encapsulated in the recent Golder Associates report, which is available on North Vancouver District’s Identity website.

Perhaps unfortunately for council members, the report notes that there is no clear consensus amongst local residents as regards to the preferred maximum building height. While many have stated their preference for no change to the existing neighbourhood, or the inclusion of buildings that are no taller than five storeys in height, one method of calculating the feedback indicated that the 12- and 16-storey building options led in popularity.

If that’s the case, it’s happy news for Mark Sager, who was hired by Bosa Developments to collect public feedback and work with a new architect to create a proposal in keeping with what residents say they want to see in Lynn Valley. Sager unveiled the new drawings in front of a crowd of approximately 200 residents at Lynn Valley Mall on September 12. All audience comments at that event were supportive of the suggested redevelopment proposal, but Bosa  Developments will not be submitting a preliminary application to the District until Council chooses between the options presented in the Sept. 23rd report.

Council deferred the vote after requesting that staff ‘expediently’ investigate the comparative economic impacts of choosing a five-storey height maximum over the other option, which allows for five through eight storeys, with the option of allowing for exceptions of up to 16 storeys in the town core.

Bosa’s revamped drawings include two 12-storey buildings and a completely redeveloped interior and exterior shopping centre. They can be viewed in the Bosa storefront in Lynn Valley Mall, in the former pet store premises, from noon to 6 p.m. every day except Sundays. 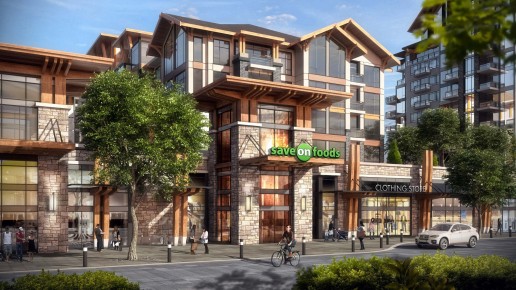