Lynn Valley will be buzzing with activity for the ninth annual Culture Days September 28-30th. Events and activities will be happening throughout Canada, North Vancouver and in our very own neighbourhood.

At the turn of the last century, Lynn Valley isolated, forested and at the edge of the frontier.

“It really was in the mountains,” said North Vancouver Museum and Archives Curator Karen Dearlove. “Before bridges it was a fairly remote. Just to get up here traveling from Burrard Inlet was difficult. It was mostly skid roads for the mills.” 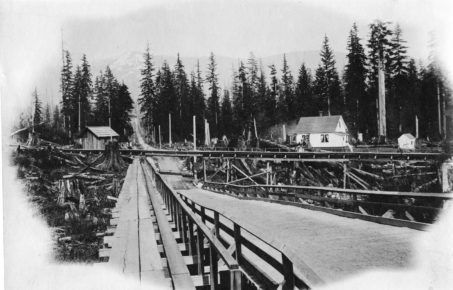 The heavily treed landscape was bisected by Tote Road, a rugged skid road that allowed oxen to haul felled logs down to the Moodyville waterfront, “Centre Road” (now Mountain Highway), and Pipeline Road, a plank road along which a pipeline was installed to carry drinking water from Rice Lake into North Vancouver.

Its relative remoteness and difficulty did not keep people away. The community was first called Shaketown because of the mill – on Mill Street – producing cedar shakes or perhaps it was because of the the shake-sided shacks housing the necessary workers.

“Because the workers at the mills wanted to live close by, homes were built, stores opened, clubs and churches were formed. There was an influx into the area and quite quickly it became a community,” said Dearlove.

The appeal of good jobs, land and a community drew a diverse group of workers from early Chinese and Japanese workers, to industrialists from Vancouver and a number of families from Finland, plus many others, she said.

“Many were like Walter Draycott – they had a sense of adventure,” she said. 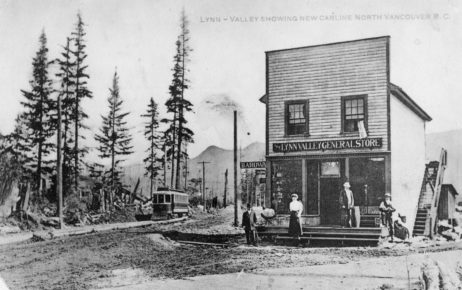 Ca. 1910. Depicting the new streetcar line at Lynn Valley Road and Ross Road. The Lynn Valley general store is at the right.

The September 29th Shaketown walk will take participants on an hour-long stroll through Lynn Valley, centring on the intersection of Lynn Valley Road and Mountain. Dearlove will present historical images alongside today’s environment to explore juxtaposition of then and now.

“We have some really great historical photos that show how buildings have changed or moved,” she said.

All images courtesy of the North Vancouver Museum and Archives.

To learn more about Lynn Valley’s history check out this page.