Forging in the forest, not foraging

It took three years and countless hours to go from clicking an intriguing YouTube link to becoming a master bladesmith in his own right. Lynn Valley Forge’s Casey Vilensky now ships his creatively crafted knives all over the world. 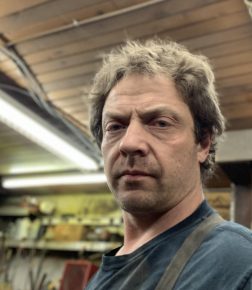 With a background as a luxury car mechanic and proficient woodworker, Vilensky pairs his metal and wood experience beautifully, making the blades, handles, and wooden sheaths of his knives. Three years in from his first attempt, his knives are unquestionably art. Vilensky’s Instagram account chronicles the progression from one art to another.

“It’s a different thing, most people get into something like woodworking,” he said. “I kind of will metal into what I want it to do.”

A fateful day of woodworking research led Vilensky across some bladesmith videos.

“YouTube is great for makers who share their craft,” he said “I was randomly watching videos and these Damascus knives came up and I was interested.”

Using an existing space – not huge – about the size of a garage, Vilensky began to adapt his woodworking shop into Lynn Valley Forge.

“I added tools as I could afford to buy them,” he said. “Definitely having a mechanical background gave me experience with the process and my skills for woodworking gave me the confidence to create. I knew absolutely nobody, no other blacksmith in the Lower Mainland. The learning curve was very high at first. Knifemaking isn’t just about making something beautiful it is also about making it functional. Nobody asked me to buy a knife for the first year.”

His progress required patience and a lot of practice. 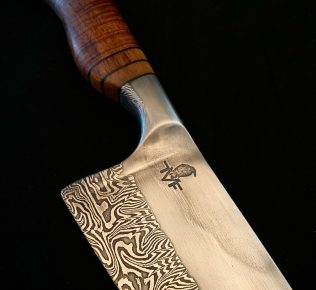 “The shop gets hot, it’s noisy, you get covered in grinding dust and wood dust. It’s not glamorous but it produces results that are quite beautiful.”

His passion and pursuit of quality supplies and tools have also led him far from his previous career to fully embracing blacksmithing, not only as a creator but also as an importer. Vilensky now distributes trade tools to the growing blacksmithing community in Vancouver and Canada.

As an artist, he specializes in intricate mosaic Damascus steel. He is strongly influenced by the history and traditions of Japanese knife making.

“The mosaic means you are working with a repeatable pattern,” he explained. “They look like flowers or explosions or a river running down. You are basically trying to paint a picture with steel.”

It’s a good time to be creating such labour-intensive pieces of art as more people are recognizing the time and effort it takes to make one knife, said Vilensky.

“There was a huge failure rate as I was learning. I have a bucket of knives that didn’t work out,” he said. “It’s really frustrating – some patterns take two weeks, working the steel two hours a day, every day. You can only do one operation in one day, and prepare for the next. It can take two weeks and on the last operation it fails, overheats or cracks and you just . . . start over. Luckily that doesn’t happen too much anymore.”

With future goals to continue to improve his skills, Vilensky’s priority is to maintain the artistry, and despite the lucrative opportunity of high-end knives, not fall into the trap of overproduction. 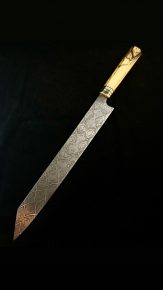 “I don’t want to fall out of love with this. I have no desire to make reproductions, every piece is unique and that is the way it is supposed to be,” he said. “It’s a fun hobby that I sell a few knives to pay for but I want to keep it a hobby I love and not turn it into a job.”

Instead, he is sharing his love. The next project on the horizon is joining the team at Fraser River Forge to teach classes on bladesmithing.

“I know how hard it was for me to get into, it was just watching videos and not having any personal instruction.”

Sharing his work on the other hand is more complicated. He walks a fine line of producing enough to fund future pieces while maintaining his quality and passion for the work. Vilensky makes a few pieces available through specialty shops but most stay in the hands of friends. The knives have made their way into the hands of chefs and collectors – even to Japan, often seen as the world leader in artisan knives.

“It was humbling to have a few requests from Japan and having some good reviews from Japanese bladesmiths makes it feel like I have achieved something.”