About 200 people came out on Thursday, Sept. 12 to an informal presentation that brought residents up to date on the evolving proposals for the Lynn Valley Mall of the future. 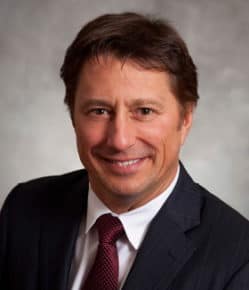 While host Mark Sager, who is handling public consultation and overseeing the new designs on behalf of mall owner Bosa Developments, emphasized that the evening was not a formal hearing or open house, it did give attendees a peek at what may be coming down the pipe.

(Mark said that Bosa Developments has “total, complete respect for the process” and won’t be submitting a preliminary application until North Vancouver District votes on the manner in which the Official Community Plan (OCP) will be implemented in Lynn Valley. Click here for our post explaining the process that takes place once an official application has been made to the District.)

The evening started with a talk and slide presentation that provided a good history of the process, including Mark Sager’s own belief that Bosa Developments’s original proposal, which included a 22-storey building, was not a good fit for Lynn Valley. He explained that the design was based on the OCP’s allowed Floor Space Ratio (FSR) of 3.5, meaning that for every square foot of land one owns, 3.5 square feet can be built on top of it.

Mark showed computer renditions of what a 3.5 FSR would look like if the Bosa property was developed with the goal of keeping buildings as low as possible. The result, shown on the screen, was shoulder-to-shoulder buildings built out to the sidewalk,  each several storeys high. This, Mark indicated, was untenable and a design disaster.

Instead, company owner Nat Bosa agreed to take an economic hit and voluntarily drop the FSR to 2.5, which allows for building height to remain moderate, but still leaves room for plazas, green space and community amenities. (The current mall, by comparison, has a 1.75 FSR.)

Mark then introduced renderings of the new design, and explained some of the major changes that would ensue if it, or something similar, was approved. Important to note is that the proposed redevelopment under discussion would encompass the Zellers area, the old library, and the adjacent concrete parking garage. If passed, Bosa would purchase the old library site from North Vancouver District in a multi-million deal, money which the DNV would use to help pay off costs of constructing the new library.

Inspiring the design is a mountain village look that has outward-facing retail outlets at street level, which terrace back into higher elevations, including two 12-storey residential buildings. On top of this retail “podium” would be acres of usable green space for the building residents, while two new plazas at street level would provide gathering space for community residents. 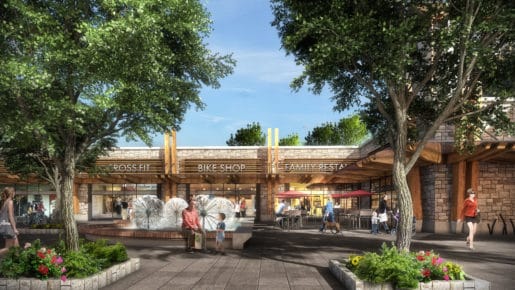 A new, landscaped high street would connect 27th Street (where one currently enters the Safeway/Zellers parking lot) with Lynn Valley Road, while another new throughway would travel along the back of the current mall, providing a better connection from 27th to the new library and likely housing a number of ‘live/work’ studios for home-based businesses such as accountants, notaries public, etc. Parking for the redeveloped area would be underground.

The development would include approximately 379 living units, to be built over a five-year period, with the needs of Lynn Valley downsizers and younger families in mind. A 6,000 square foot community space would be included as well, for North Vancouver District to consider for uses such as a community theatre or North Shore Disability Resource programs.

This development would see a flagship Save-On-Foods go into the old Zellers location, while Shopper Drug Mart would move to the current Save-On space. The rest of the existing mall, he explained, would retain the same footprint and parking, but have a complete interior/exterior makeover, with more a more interactive, engaging street presence. He is looking at creative uses for the existing huge, flat roof, and hopes the 175,000 square feet can be transformed into a green roof or other attractive feature. And, to the delight of pedestrians everywhere, the renovation will ensure a better connection between the mall and Lynn Valley Village.

Mark is planning for a climbing wall to be situated in the mall, and hopes that existing tenants will be joined by such additions as good family restaurants and a cross-fit gym.

The floor was opened up to a number of questions and comments, all of which were supportive of the revitalization project. Linda Findlay, 25-year resident of Lynn Valley, had brought a prepared address.

“We consider ourselves extremely fortunate to live here,” she said, “Growth in our community is natural, and not any one group is going to get everything they want [in the design plans.]” Given the controversy that has surrounded some aspects of the project, she said “I would like to thank you and Nat for not giving up on Lynn Valley.”

Michael Edwards, a former president of the Lynn Valley Community Association, recalled  previous occasions in which the LVCA had spoken against developments, some of which were later approved. “It wasn’t such a shocker after all,” he said of the McDonalds going into Lynn Valley, prompting laughter from the crowd. He also referred to the number of failed attempts at Lynn Valley Centre revitalization over the years, and said that Bosa’s current sketches “are the most beautiful plan [he’s] ever seen.” He did not want to see “months and months of work for naught,” and emphasized that “we have no right to stop young families from living here.”

Doug Curran commented that he had been working with people in the Lower Capilano neighbourhood to help residents understand and envision the design possibilities that could be expressed within a higher density allowance. He said that he has attended a number of meetings and listened to residents concerned by the prospect of higher buildings in Lynn Valley, and notes that he has “heard statements without foundation, without logic, and prejudicial to the future wellbeing of Lynn Valley.” He encouraged residents of all persuasions to get more engaged and informed about the process.

Some residents commented that the current mall is ‘dying,’ and Mark agreed it was a struggle to get new tenants with the existing set-up. He says the tenant businesses rue the fact that the parking lot is often full – discouraging their customers –  while the mall itself is empty. Mark said his team has spent a number of hours out in the lot, talking to people parking there,  and finding that it is sometimes being used as a park-and-ride, and often used for people going only to Lynn Valley Village. The latter group, he said, commonly expressed the feeling that they did not like the design of the stairwells in the Village’s underground parking, so the mall design team has taken that into account and has allowed for more open, inviting stairwells in their own redevelopment design.

After the discussion, a number of sketches were unveiled and people circulated to look at the various views and floor plans, ask more questions, fill out feedback forms and, if they chose, to add their name to a petition lending support to the revitalization. If people do want to see change, Mark emphasized, it is important for them to express their opinions to North Vancouver District Council.

Mark will be re-opening his former storefront in the old pet store premises across from CIBC, so people can drop in to have a closer look at the designs and continue to make suggestions. Also in the works is a website for the same purpose. LynnValleyLife will publicize further details, and a variety of design sketches, as they are made available.