Most local drivers pass by the nearly windowless grey building on the corner of Lynn Valley Road and  Harold without a second glance, it has long ago disappeared into the invisibility that comes with familiarity. 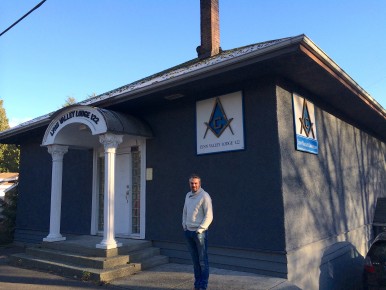 Walkers, though, travel at a different pace and have time to notice, and wonder about, this unique building that has housed Lynn Valley’s Masonic brotherhood since 1930. If he happens to be on the premises, Mason Phil Perry, a member of the Lodge since 2009,  welcomes their questions.

At an interview with LynnValleyLife, Phil and fellow Mason Alphonse Quenneville explained that the talk about freemasonry being steeped in secrecy and intrigue is largely urban myth fuelled by Dan Brown-style novels. 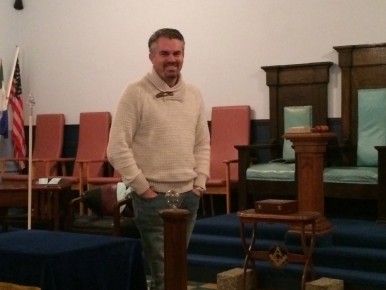 There was certainly no hesitation shown in welcoming LynnValleyLife over the threshold, even to the point of allowing its female editor into the Lodge’s inner sanctum, camera in hand. While this windowless upper-floor room is obviously decked out for ceremonial use – complete with flags, ornately carved podiums, and throne-like chairs on a raised dais – the lower level consists of an ordinary kitchen and eating area that houses social gatherings and the Lodge garage sales.

The history of freemasonry is undeniably rife with intrigue and readers interested in its roots can find fascinating reading on the BC and Yukon Grand Lodge website.

According to Phillip and Alphonse, however, today’s modern Masonic Lodges simply seek “to make good men better men.” The Lodge does not recruit members – “we’re not Amway,” says Alphonse – but instead wants members to be attracted to Freemasonry for its values and fellowship. Masons must be men 21 and over, but beyond that, the Lodge says “to be one, just ask one!”

Alphonse says the Lynn Valley Lodge is “blessed with a great gang of high-energy guys,” and Phillip notes that a growing number of the members are in their 20s and 30s. Beyond age and sex, the only requirement for membership is that initiates believe in a Supreme Being – however they choose to define that. Lynn Valley Lodge’s members include people of all religions, and those who do not outwardly practice any religion.  Membership in this cross-cultural group “is a constant, regular reminder that Freemasonry offers brotherhood and friendship across all of mankind,” says Phil. 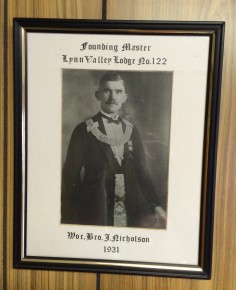 In fact, discussion of religion and politics are forbidden in the Lodge, due to being potentially divisive. Values are instead imparted through the telling of moral tales, which Alphonse describes as universal allegories – similar to Aesop’s Fables, or Jesus’s use of parables in the Bible. The stories are only conveyed within the Lodge however, not to those outside it – not because their content is inflammatory, says Phillip, but because it allows Masons practice in maintaining confidentiality, an important life value.

Masons are also close-lipped – or modest, as Alphonse terms it – about their charitable deeds. According to the Lynn Valley Lodge FAQ page, Freemasons throughout the world give over three million dollars per day to a wide variety of causes, just some of which include Shriners’ children’s hospitals, learning centres for children with special needs, and the Masonic Angel Foundation, which helps needy individuals who do not fit other social services criteria. 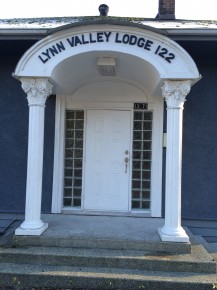 Along with supporting other local causes, Lynn Valley and other B.C. Masons run the Freemasons’ Cancer Car Program in partnership with the BC Cancer Agency, providing free round-trip rides for people without transportation to their treatments.

For more information about the Lynn Valley Masonic Lodge, please visit their website.