When many young people are enjoying their last taste of summer, Lynn Valley’s Jake Musgrave is donning a mask and taking up a crusade across Canada raising money for Covid relief and the Leukemia and Lymphoma Society – all by bike.

August 28th 23-year-old Musgrave will clip into his pedals and hit the road, aiming to arrive in Halifax a month later. He hopes the ride will do more than take him across the country. Musgrave hopes to raise money as well. 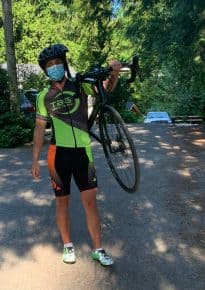 His dual causes – Covid-19 relief and the Leukemia and Lymphoma Society – hit close to home and are more linked than it would first appear. Musgrave lost his father Randy at eight-years-old to leukemia. It’s a disease that feels powerless to fight and a surprise when it hits, he said.

“It was so sudden,” said Musgrave. “He was healthy, active, a firefighter. He didn’t know what was happening. He inspires me to live an active, healthy life.”

Musgrave sees Covid-19 as a situation where we don’t have to go it alone.

“Let’s be in this together, let’s protect each other,” he said. “Wear a mask so you can protect others. I don’t want someone else to have the trauma of losing a loved one.”

He is taking his own advice and is planning on riding all 6,021 kilometres while wearing a mask.

“When I first approached I thought it would be tough. It certainly is harder to ride with the mask on – I have noticed that after some longer rides. It’s awkward but doable,” said Musgrave. “Wearing a mask and doing something small to keep everyone safe is huge support. Just think about it – wherever you go, grab your phone, your wallet, your keys, your mask.”

The trip has been laid out with varying distances each day from the shortest 112km to the longest 250km, with the goal to finish in 30-33 days. It could be less if he surpasses his expectations, he said. The sections were divided based on elevation gain. 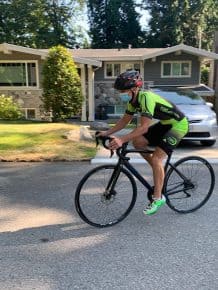 “I am planning on the Coquihalla and through the Rockies at Golden and Revelstoke,” he explained. “Pretty much along the Trans Canada but I have spoken to cyclists who have done it to hear about better routes where the shoulder is wider or secret spots where I won’t get blown away by big trucks.”

While Musgrave has plenty of riding experience this will be his biggest adventure to date.

“I have been riding from age six or seven when my dad got me out on my mountain bike – he was a very active man,” said Musgrave. “But it was really my aunt Lesley [Tomlinson] an Olympic [mountain bike]  athlete who got me into road racing in Grades 11 and 12.”

He works at the cycling gym TaG and gets in plenty of riding but is also intensifying his training working at longer distances at his goal pace around 30km/h.

“Since I decided to do this ride I have decided to step it up,” said Musgrave. “I have always done TaG two or three times a week but I need to train harder and do it almost every single day.”

The ride will take Musgrave the furthest east he has ever been in Canada. He credits fellow North Shore and TaG rider Jane Weller for inspiring him to aim big.

“She rode across the country alone –  which is phenomenal. I figured if she could do it I could give it a try.”

Musgrave, on the other hand, is choosing with his tighter timeline to be supported on the road by friends driving with a trailer. As for challenges, he is preparing for saddle sores and wind.

“I’ve been through a lot. I think I am pretty mentally strong.”