This is a tough day, the morning after tragedy. We are buoyed up by all of the outpouring and offering of help.  We will keep this page update with information as we get it.

An early morning fire in the Lynn Valley area of North Vancouver has tragically claimed the lives of two individuals. The fire broke out at approximately 2:30 am on Monday, June 11, 2018 involving a two story apartment complex in the 2000-block of Whiteley Court.

The fire was fully involved when emergency services arrived on scene. District of North Vancouver Fire Dept. battled the aggressive fire for several hours before police and fire personnel could safely enter the burned wooden structure. 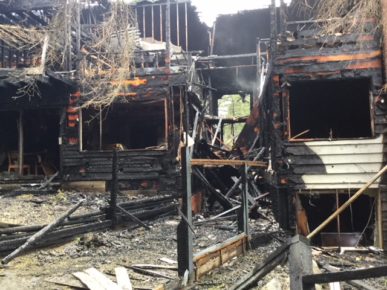 The bodies of the two victims, both from the same family, have been removed from the fire scene. The age and identity of the victims is not being released at this time. A full investigation of the fire is being conducted by the North Vancouver RCMP Arson Unit, District of North Vancouver Fire Dept. and the BC Coroners Service. There are approximately 12 other injured residents who have been taken to several hospitals in the lower mainland with various injuries.

The North Shore Emergency Management Office (NSEMO) was activated to help with the evacuated residents of the three neighbouring apartment buildings. Those evacuated have since been allowed to return to their residences. There is extensive damage to the 17 units of the fire ravaged building. Approximately 70 residents have been permanently displaced from that apartment building.

June 18 – 7-10:30am at Lynn Valley mall. (Location TBA. Please do not drop off bags outside collection times)