Stepping up for sick kids

Much of Reilly’s free time is spent outdoors. A typical North Shore tween she spends a lot of time in the forest. More than average kid, she thrives outside: tackling road and mountain biking, participates in a weekly forest school program and follows in the footsteps of her trail running mom. This is a lifestyle for the Lynn Valley family – her dad Ryan even runs  a business renting emergency locator beacons to weekend adventurers. It all stopped last April when a normal day of normal play resulted in a cut on Reilly’s knee and within 24 hours she was a long-term resident at BC Children’s Hospital. 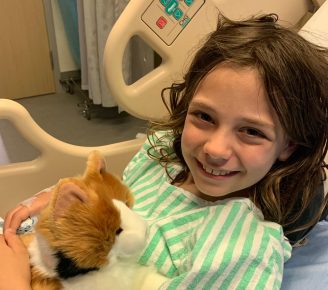 “Many people with this type of infection do not make a full recovery,” said mom Caroline. Severe necrotizing fasciitis kept Reilly in and out of Children’s and Lion’s Gate hospitals for two months. As her health improved she was offered a relatively new program that got her home and active again.

“Towards the end of her stay she only needed to be there to get IV antibiotics,” said Ryan. “We were able to be a part of the Home IV program. It was a portable pump that went around her waist. She was able to go back to school, get back riding her bike. It gave her freedom again.”

The family was one of the first handful to take advantage of the new technology.

“I was excited to give it a try because I wanted to see my friends,” said Reilly.

As Ryan points out, for anyone juggling family, jobs and a sick child is difficult but a long hospital stay for a child is even harder during the covid pandemic. Visitors were very limited to only one family member. The addition of this new program frees up hospital resources and gets kids home and back to normal quicker, he said.

From adversity to adventure 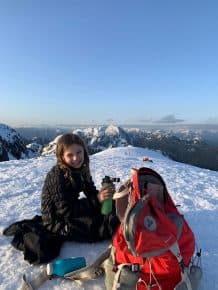 In March, before her injury, Reilly was getting excited about ‘peak bagging’ – that is the hobby of hiking to summit as many peaks as possible. The south coast has a number of informal groups and challenges encouraging people to get outside and active. In the early season with snow still on the ground, she reached three summits. The idea of continuing the challenge as part of her recovery led Reilly to launch her “Peak bags for IV Bags” fundraising challenge – on until Oct 31. The medical program is so new, Reilly’s fundraising will help with training and education materials for the Home IV program for staff at Children’s Hospital.

“Peak bagging feels like an accomplishment more than a hike,” she said. “It’s an adventure. My favourite was Goat Mountain because it had lots of ropes and was really fun.”

Even with 13 peaks under her belt since March, like most kids, Reilly doesn’t always love hiking, said dad Ryan.

“There can be resistance, but getting to the top was her goal,” he said. “She like that we were tracking her peaks and that there was a leaderboard. She also liked seeing what [her mom] and I do for fun.”

“I think you have gotten so much stronger, but you are choosing hikes that are also growing in difficulty,” chuckled Ryan, with a  look to Reilly. “The last week of September Beatrix reached Tim Jones and Seymour peaks for her ninth and 10th post-injury peaks.”

With the drive of helping more kids access the IV technology that made a difference to her quality of life, Reilly learned the power of setting goals.

“I liked that I was raising lots of money,” she said. “And Slurpees at the end!” 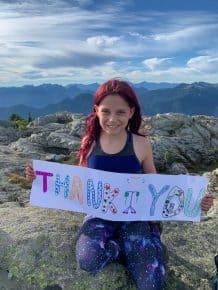 For Reilly, the key motivation was her fundraiser but she also has other advice to get kids out, active, and bagging their first peaks:

To start bagging peaks all you need are some good hiking shoes, said Reilly, adding her mom carries a pack with an emergency blanket, safety gear, water, extra food and clothing, and a phone. For routes, fellow peak bagger and North Shore teen Harry Crerar has written a family hiking book.