New “Phase Two” water restrictions were announced today, so this article on hot-weather lawn care is just in time! Check out the water sprinkling rules here – and take note of the following advice from Matt and Rob Boyd of Endless Summer landscapers (you can find more of their articles for LynnValleyLife by clicking on the link!)

If spring lawn care is about getting your lawn healthy and green, summer lawn care is about KEEPING it healthy while temperatures soar and rainfall becomes a fleeting memory. It’s also about maintaining a lawn that can withstand all the barbecues, games, parties, and running feet that summer has to offer. Here are some tips for keeping your lawn in shape over those long, hot days of summer.

END_OF_DOCUMENT_TOKEN_TO_BE_REPLACED

Divide your perennials to keep them perky

Spring is well upon us, so it’s time to tune into the local experts for some garden tips.  Here is some advice on keeping your perennials looking perfect, from Matt and Rob Boyd of Endless Summer landscapers.

Many perennial plants grow in an ever-widening clump. After several seasons of growing, these perennials will begin to die out in the center and look more like a ring than a clump.

END_OF_DOCUMENT_TOKEN_TO_BE_REPLACED

There is a lot of chatter about raw food diets for cats and dogs these days, but what does it all mean, and how does it benefit your pet? I will try and keep it simple in this post, explain why it is so beneficial, and give tips on how to feed your pets raw!

END_OF_DOCUMENT_TOKEN_TO_BE_REPLACED

From the desk of Peggy Trendell-Jensen, editor:

Oftentimes the convenience of online shopping translates to an unfortunate flagging of support for the bricks-and-mortar shops that are so much the heart of a healthy community. Fortunately, Save-on-Food’s new online shopping service doesn’t put us in that moral dilemma – we can support this Lynn Valley Day Diamond Sponsor while still kicking back with our laptop on the couch!

END_OF_DOCUMENT_TOKEN_TO_BE_REPLACED

After years of extensive public consultation and study, in the end it took North Vancouver District’s seven councillors less than an hour to unanimously approve four bylaws that will allow Bosa Development’s Lynn Valley Mall development to proceed. 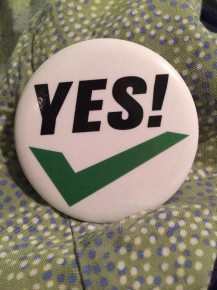 A special council meeting was held on the evening of Tuesday, June 10 with only one order of business: to vote for or against the redevelopment project, which includes a complete overhaul of the mall, mixed residential-retail usage, two 12-storey buildings, a new High Street connecting Lynn Valley Road and 27th Street, and a variety of public amenities.

END_OF_DOCUMENT_TOKEN_TO_BE_REPLACED

Warm-weather watering wisdom from the pros

The sun is out, and your garden needs you! Here are some warm-weather tips from Matt and Rob Boyd of Endless Summer landscapers, with some especially good advice about watering plants properly!

These are just a few gardening tips for you to consider here in late May/June. Many people seem to think that just because all the plants have been put into their places for the summer and your perennials are blooming, or past bloom, there is no more work to be done. The garden is full of multi-colored flowers, so there must be little or nothing to do. Right? No, there is always work that may be done.

END_OF_DOCUMENT_TOKEN_TO_BE_REPLACED

Got a wall? Here’s a workout!

This just in from D’Alton McCarthy, the local trainer behind Body by D’Alt.

SEDENTARY ? NO TIME TO EXERCISE ? DON’T ENJOY THE GYM?

IF YOU HAVE A WALL… I HAVE AN EXERCISE FOR YOU…

These two exercises, used on a wall, can give you a great and safe work out in under five minutes – one that’s good for beginners, but gives more fit folks a challenge, too.

If you are a healthy beginner, start with a five-second invisible chair (also known as a chair sit) followed by a wall push up. I have included pictures of the correct form and optimum positioning. 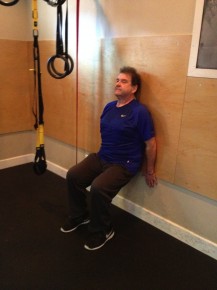 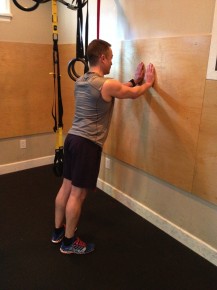 Starting position for wall push up. 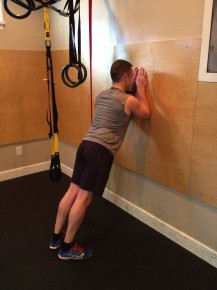 Slowly move towards wall, then return to start position.

If you are new to exercise, start with the first three to four rounds.

The most important thing to remember is that you are better off doing less with proper form than doing too much with bad form.

In the following month add one more round, or opt for the more challenging position.

The rezoning proposal for the Bosa development (1175 Lynn Valley Road and 1280 East 27th Street) received first reading at Council on Monday, March 24, 2014. The development proposal has been referred to Public Hearing, which is the community’s formal opportunity to provide input to Council.

The Public Hearing will be held on April 15, 2014 at 6 pm at District Hall. The Agenda for the Council Meeting, including the Report to Council and attached bylaws, is available for review (Agenda Item 9.1) by clicking here [scroll to page 47]. For further information on the Development Application, click here.

(For our blog post about the recent public information night Bosa hosted regarding the project, click here.)

Spring has sprung! And now that it’s here, Endless Summer Landscapes offers up some essential spring cleaning tips to help LynnValleyLife readers beautify their properties, lawns and gardens. (Learn more about this local company by reading its LVL Merchant Profile!)

Prune away dead and damaged branches 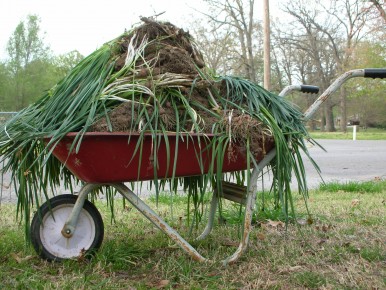 Cut back and divide perennials as needed

Clean up around plants

Rake out fallen leaves and dead foliage (which can smother plants and foster disease), pull up spent annuals, and toss in a wheelbarrow with other organic yard waste.

Now is a good time to spread a pelletized fertilizer tailored to existing plantings on the soil’s surface so that spring rains can carry it to the roots. Add a 5-10-10 fertilizer around bulbs as soon as they flower to maximize bloom time and feed next season’s growth.

Use pins to fasten drip irrigation lines that have come loose and a square-head shovel to give beds a clean edge and keep turf grass from growing into them.

Spring is a good time to test the soil’s pH so that you can assemble the right amendments. 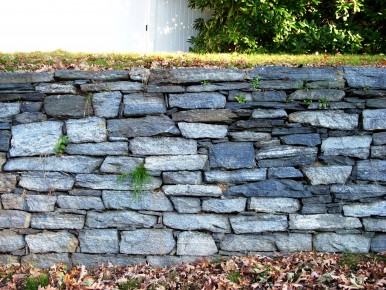 Four hundred chairs had been set out, but they proved unequal to the task of seating the overflow crowd of residents who came out Wednesday night to learn more about the Bosa Developments proposal for the transformation of Lynn Valley Mall. 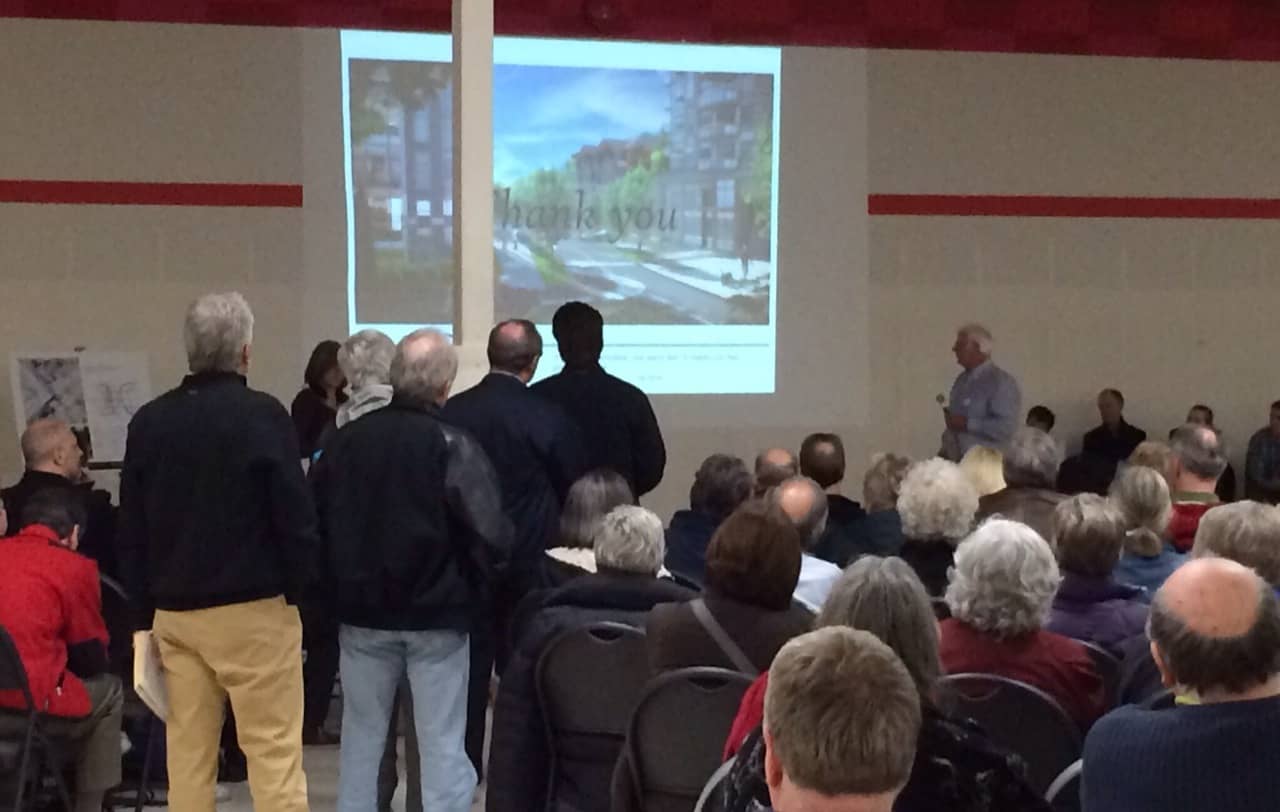 Some of them had previously attended an informal September presentation, during which Mark Sager outlined the new vision Bosa had developed based on months of dialogue with the community. (For an overview of the “mountain village” design, which includes a completely refurbished shopping mall and two 12-storey residential buildings, click here.)

“I don’t know if you realize how much your input has shaped this,” said Sager as he finished his slide presentation. “We have done our best to try as hard as we can to address the community’s wishes.”

Knowing that traffic is a big issue for those people concerned about increased densification in Lynn Valley, for example, Sager announced that Bosa Developments has offered to finance the addition of an extra lane at the entrance to the Trans-Canada Highway, at the highway overpass marking the end of Lynn Valley Road, a proposed improvement that has been met with enthusiasm by all levels of government involved.

The audience question-and-answer period that followed Sager’s presentation took place under the direction of Catherine Rockandel, an independent, third-party facilitator who described her role as ensuring that all voices were heard in an environment of “respect and civil conversation.” She noted that all comments coming from the floor would be recorded and included in her report to North Vancouver District Council – though at least two council members were spotted in the audience, taking in the evening for themselves.

Comments from the floor were very largely positive, with even those opposed to increased density in Lynn Valley tipping their hat to Bosa Developments for the compromises they have made in response to community feedback. Glenn MacKenzie, one of the founders of the “Stop Hirises” campaign in Lynn Valley, called Bosa “a great developer”, and focussed his criticism not on the plans themselves, but on the whole issue  of densification in Lynn Valley.

Most, people, however, seemed to think that a redevelopment of the area is long overdue.   Ron McLean and his wife moved to Lynn Valley almost 50 years ago, when a house cost three times his annual teacher’s salary. Now, he says, a house costs about 15 times the typical teacher’s salary, and the eight houses around him, which used to house 23 children between them, are now home to only four children. His own kids have had to move away, with the result that he and his wife don’t see their grandchildren more than three or four times a year. “I have to agree that high rises are appropriate,” he said. “We have to share the wealth of our community.” 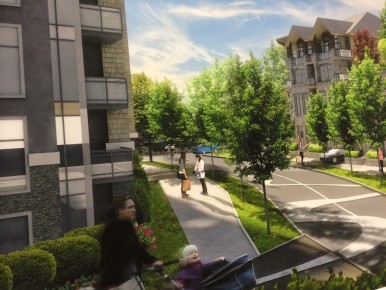 Ian Jarvis was next to the microphone and waved across the crowd to Ron McLean. “I used to play soccer with your son, Cam,” he said. “We were often ‘those kids’ who hung out at the 7-11.”  He, too, wishes he could live back in Lynn Valley, and expressed his appreciation of the efforts being made to achieve greater housing diversity. When he saw the signs protesting the addition of high rises to the community, he assumed that 30 or 40-storey towers were being planned. “But 12 storeys, are you kidding me?” he said, prompting laughter from the audience. “That’s a high rise?”

While it is not uncommon for older, well-established residents to resist change in their neighbourhoods, many of the people speaking in favour of the proposal have in fact lived in Lynn Valley for decades. They pointed to increased community amenities, options for downsizing their housing, and the walkability of the Bosa redevelopment as attractive features of the proposal.

A resident of Craftsman Estates, who lives across the street from the mall and would be directly affected by the construction plans, also spoke in favour of the development. “I’m thoroughly impressed with the Mountain Village look and the willingness of Bosa to work with the community,” said Hazel Boyd, noting that the mall should offer a more robust business environment and that the District of North Vancouver needs more of a tax base to ensure future economic health.

There is still much to be discussed as the project is negotiated, however, including the best use of the allocated community amenity space, and ongoing dialogue about traffic management plans, aspects of which are already under way. This latter issue, of course, is not solely specific to the Bosa proposal, but an overall part of the District’s implementation of the Official Community Plan for Lynn Valley Town Centre. (Click here and scroll down to #4, Additional Information, for a link to the Lynn Valley transportation study commissioned by North Vancouver District.) 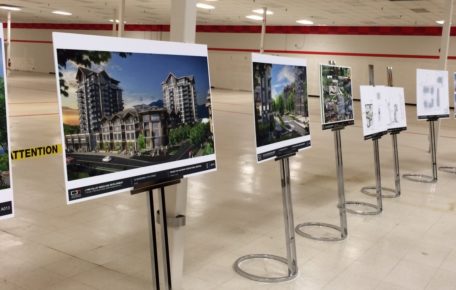 Feedback from Wednesday’s public information meeting will go back to North Vancouver District staff, who will prepare a report for council either recommending that the application be denied, or that it proceed forward to public hearing. For a step-by-step look at the whole approval process, read this post; we have just completed Step #5.)

If you haven’t yet had a look at the plans and drawings for the proposal, visit the Bosa storefront in the mall in the former pet store space, or click here.  Your feedback can be sent directly to Mark Sager by clicking the orange tab at the left of the screen on his Lynn Valley Connect site.

On February 13, the District of North Vancouver’s Advisory Design Panel unanimously passed a motion of recommendation to the District Council in support of the proposed re-zoning. Public input will be taken at the public hearing stage, should the application proceed.